Old favourites: the books that furnish my rooms 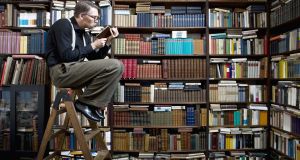 It is a pleasure to share some of my old favourite books with Irish Times readers and I am honoured and thrilled to be given the opportunity.

Books Do Furnish a Room is the title of the 10th in Anthony Powell’s 12-novel sequence A Dance to the Music of Time, and the reforming and witty English Anglican cleric and writer, the Rev Sydney Smith, opined that “no furniture is so charming as books”. So as I invite readers to sit in or on some of the pieces I have chosen, I would like to give them some idea what caused me to pick them.

Some of the books reflect shades of my younger self. As a teenager, I read virtually all of John Steinbeck and Cannery Row was a particular favourite, mainly because of the generous and lovable character “Doc” (based on Steinbeck’s close friend Ed Ricketts); his dietary habit of grating chocolate onto his frying sausages has stuck in my memory.

Some of my choices take me back to the headiness, idealism and enthusiasm of studying literature at university, such as Brian Moore’s Emperor of Ice Cream and Richard Powers’s The Hungry Grass. The latter proved very popular and that Powers died shortly after its publication and so never got to reap the rewards he had worked so hard to achieve gives it added poignancy.

As a young university graduate, I went to Spain to teach English in 1977. The country was in a transition between dictatorship and democracy at the time; many who had lived through its terrible civil war were still alive and George Orwell’s Homage to Catalonia therefore had an immediacy it might not otherwise have had for me.

I also studied history at university and my love of the subject, and especially Irish history, is reflected in the choice of Ireland Since the Famine by FSL Lyons and Remembering Sion by Desmond Ryan. As well as for their content, both books are also remarkable for the style in which they were written.

Given my love of history, it will be no surprise that historical fiction also features among my choices, specifically Maria Edgeworth’s Castle Rackrent, Liam O’Flaherty’s Insurrection and Sabina Murray’s Valiant Gentlemen. Each treats their historical eras, events and personages very differently but all do so with verve and imaginative power.

Anne Brontë is the least known of that great family of novelists but her Tenant of Wildfell Hall tackled contemporary social problems, especially the unequal position of women, more openly and fearlessly than either of her more famous sisters.

Books on social activism and on the quest for self-knowledge and faith that often accompanies it have always attracted my attention. Dorothy Day was a brilliant, radical, 20th-century American social activist, writer and journalist, who defied gender and political norms and converted to Catholicism. The Long Loneliness, her autobiography, is an amazing and memorable story.

Habit of Being: The Letters of Flannery O’Connor gives a wonderful insight into that fine American writer. Her letters show her equally at home talking about the behaviour of chickens or the philosophy of St Thomas Aquinas and also reveal her great wit and strong faith: so aware of the absurdities around her but also alert to the possibilities of first and last things.

Another choice in this general area is A Grief Observed, CS Lewis’s searching meditations on the anguish he suffered following the death of his wife.

If some of that seems bleakly heavy and so might be inclined to put readers off, it will be lightened, hopefully, by such (albeit very different) romps as Cold Comfort Farm by Stella Gibbons, The Pursuit of Love by Nancy Mitford, The Crock of Gold by James Stephens and My World and Welcome to It by James Thurber.

I fell in love with Italy the first time I visited it and that love has endured and is reflected in my choices of Ann Cornelisen’s Torregreca: Life, Death and Miracles in a Southern Italian Village and Carlo Levi’s Christ Stopped at Eboli. Both are set in similar parts of Italy and in an era quite remote in time and circumstances from our own but the essences of the Italian character that they convey may still be seen today.

Finally, I have always loved dogs and it is no surprise that dog-owner memoirs continue to prove perennially popular (and, of course, dog ownership has shot up during the pandemic). JR Ackerley’s My Dog Tulip is a quite different type of dog-owner memoir. Far from shying away from the messy realities of dog ownership (the title of the second chapter is Liquids and Solids), Ackerley deals with his beloved Alsatian’s bodily functions openly, unashamedly and, in the case of sex, with an amused perplexity.

I hope readers will enjoy perusing the books furnishing my house.
Old Favourites is a weekly column that runs every Saturday in Ticket in The Irish Times. Previous columns have been curated by Lucy Sweeney Byrne (2020), Rob Doyle (2019) and Julie Parsons (2018).