From Jimmy Page to Joy Division, rock'n'roll writing can be a mixed bag 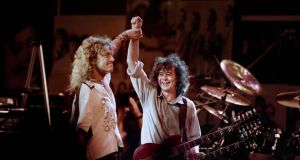 Describing a rock musician as someone who “courted the occult, curated his own legacy and guaranteed himself immortality” is perhaps over-egging the pudding, even if that musician is Jimmy Page, the guitarist for Led Zeppelin, the biggest rock band in the world back in the 1970s.

The way respected music writer Chris Salewicz tells it in his doorstopper book, Jimmy Page: The Definitive Biography (Harper Collins, £14.99), the guitarist had always believed his own hype. From being asked as a 13-year-old what his future plans were (to find a cure for cancer) to being described by a former girlfriend as making her feel “like we were somewhere off in the mists of Avalon”, Page comes across as, shall we say, a conflicted figure.

Notwithstanding his exceptional musicianship, aspects of Page’s character stretch from disagreeable (narcissism, conceit) to disquieting (a well-documented sexual preference for pubescent females, and the displaying of “Polaroids of often blurred close-up parts of female anatomy, often featuring fruit,” recalls a former band member).

Salewicz occasionally stumbles badly in writing about the man (“some of Jimmy’s more unfortunate character aspects disguised the fact that he was a really evolved human being” is but one choice evaluation) but punches above his weight when astutely analysing the music. This noted, the book is a reminder of one important detail: like VHS tapes and hula hoops, the era of the unchecked rock star is over.

A less egotistical tale is related in Some Fantastic Place: My Life In and Out of Squeeze, by Chris Difford (Orion Books, £9.99), if only because the author – the evocative lyricist in one of the best British pop groups of the past 40 years – doesn’t take himself too seriously (he lightens the prose with droll wit). Difford writes with honesty about how Squeeze rose to unlikely fame in the post-punk days of the late ’70s, of the creative partnership and close personal friendship with his bandmate, Glenn Tilbrook, and of his battles with alcohol and depression.

He writes informally, amusingly, about his background (his Northern Irish mother enjoyed “dancing and shouting at my dad when he occasionally came home from work drunk”), appearing on Top of the Pops (“I was recognised at the baker’s shop, my mum and dad liked me again”), the demon drink (“I was mostly in a good place, but that place tended to be in the pub”), and his mentorship of Cavan band The Strypes (“I’m personal management and a mirror for them to wash their faces in”). All told, a charmer.

Far less bright in tone is We Were Strangers: Short Stories Inspired by Joy Division’s Unknown Pleasures, edited by Richard V Hirst (Confingo, £12.99). Ten writers respond to the titular album’s narrative themes and sonic textures, and what might initially be presumed as an exercise in pretentiousness turns out to be nothing of the sort.

While the overall tenor of the stories is somewhat dystopian (the spectre of JG Ballard threatens throughout), the quality of the writing and the subject matter of the stories is enough for original, vivid voices to filter across. Referencing pop culture critic Jon Savage’s description of the album as “a definitive Northern Gothic statement: guilt-ridden, romantic, claustrophobic”, the stories range from abstruse (Disorder, by Nicholas Royle) and heartbreaking (Day of the Lords, by Jenn Ashworth) to brilliantly strange (Insight, by David Gaffney) and disturbingly odd (I Remember Nothing, by Anne Billson).

As a themed collection, it works remarkably well and is credibly enhanced by the inclusion of a graphic “interlude” representation (by Zoe McLean) of Transmission, a song not included on the original album, but which was later released as a single.

If Joy Division were totemic musicians for the punk and post-punk generation, then Steely Dan were equally so for older, perhaps more laid-back siblings. These days, of course, no such generational gap or tribalism exists, but the band are still tricky enough to pin down. It makes sense to have more than one voice in the conversation when attempting to analyse one of the smartest groups in rock music, and that’s why Major Dudes: A Steely Dan Companion (Constable, £9.99) works so well.

Edited by Barney Hoskyns, an acclaimed music writer (and editorial director of rock music writing website, Rock’s Backpages), the book collects a broad swathe of album reviews, commentary and interviews between 1972-2014 from a large selection of music writers and publications. From a 1977 interview (by Sylvie Simmons for music paper, Sounds) with Walter Becker and Donald Fagen (“We may have a slightly blacker sense of humour than your average person” – Becker) to a review of their 2000 record, Two Against Nature, by Ian MacDonald in Uncut (“an album so clean, clear and dry that it may seem sterile on first hearing – wrong”), this is handy dip-in/dip-out guide to the only rock group in the known universe named after a dildo.

Diary of a Rock’n’Roll Star

Republished after many years out of print, Diary of a Rock’n’Roll Star, by Ian Hunter (Omnibus Press, £12.99), is the father, the son, and the holy ghost of music memoirs, first published in 1974, and long praised as a classic music industry insider text.

Hunter (the lead singer of successful 1970s rock band, Mott the Hoople) scribbled notes during his band’s five-week US tour in the winter of 1972. Noted as being the first ever rock music memoir, the book is a revelation, especially so from a distance of over 40 years. While parts of it aren’t comforting to read (in particular, the offensively blasé attitude towards “groupies” and their so-called place in the rock’n’roll ecosystem), other elements of the book relay how genuinely average and dull the touring lifestyle can be. Hunter’s best trait is his unwavering honesty and grounded insight.

From viewing his chosen career pragmatically (“we’re all a bunch of kids playing a game with high stakes just doing what comes naturally”) to meeting musicians along the way (David Bowie – “innocence, cruelty, the nearness yet the distance, all the qualities of the star he is – only he knows what he pays for this coveted title, but I’ve sometimes caught glimpses of the sadness”), Hunter perceptively tells it like it is. It isn’t always pleasant or acceptable, but at least you know you’re reading the truth.

Back in Mott the Hoople’s day, there were rumblings of this new-fangled “electronic” music from places such as Germany and America, but to the casual listener the form within pop music was little more than a novelty (Chicory Tip’s 1972 UK number one, Son of my Father, co-written by Giorgio Moroder). Mars by 1980: The History of Electronic Music, by David Stubbs (Faber, £20) details the history of a genre of music that is now universally listened to.

It is a “personal and selective” outline, however, throwing light on the topic’s “aspects and angles, patterns and trails” rather than individual people or groups. While the occasionally swollen writing might not be to everyone’s taste (Prince’s use of the vocoder is described as “another electric device on his Cupid’s bow of polymorphous perversity”), there’s no doubting the author’s knowledge, which is both in-depth and astute.

The Darkness Echoing: How the past is politicised and marketed
Real news has value SUBSCRIBE