An Irishwoman’s Diary: Sharp insights live on 120 years after his death 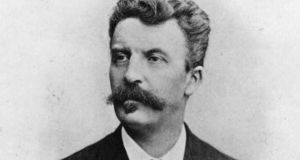 ‘Guy de Maupassant the realist saw the mean-minded pettiness of men, the civil servants and peasants with hearts as dried as peas.’ Photograph: Hulton Archive/Getty Images

His was a vile death, the madness caused by syphilis and its related physical horrors. It was an end that he knew he was facing and had tried to avoid by attempting suicide some 18 months earlier. But fate insisted on more suffering and the great French writer Guy de Maupassant, having slit his throat, failed to die. He struggled on and was reduced to crawling on all fours, convinced his brain was seeping out through his nose. He died 120 years ago today, July 6th 1893, in a Parisian lunatic asylum. He was only 42 and in a brief literary career had written almost 300 short stories, six novels, three travel books and a vast body of journalism. When critics pronounce on the art of the short story, naming Anton Chekhov as a God and pitch the might of the American masters against the best of the Irish, Maupassant, influenced by Honoré de Balzac and championed by Gustave Flaubert, is invariably mentioned.

Maupassant the realist saw the mean-minded pettiness of men, the civil servants and peasants with hearts as dried as peas. His followers include writers as diverse as Henry James and Raymond Carver. There is no denying either that although John McGahern often professed his admiration of Flaubert’s stylistic poise, many a grim-faced McGahern country policeman or school master could have strode as easily from the pages of a Maupassant story.

As a writer, what was Maupassant’s only weakness? His popularity – his huge sales made critics suspicious and reluctant to acknowledge his art. As early as the publication of Boule de Suif in 1880 when Maupassant was only 30, Flaubert praised it as a masterpiece and admitted he was grateful he had lived to read it. The first of Maupassant’s novels, Un Vie appeared in 1883, it was followed within two years by Bel Ami. It made him rich and famous, but he was never happy – not even when sailing his beautiful yacht that he had named after that second novel.

He was born in Dieppe, Normandy on August 5th, 1850, the first child to bourgeois parents. His independently-minded mother had had enough of the marriage by the time Maupassant was 11 and his younger brother was five. She secured a legal separation, then quite unusual for a woman to seek, and raised her sons alone. Maupassant was very close to his mother who was well-read and gave him an early love of books. He was also developing a love of the outdoors. He was a good swimmer. His passion for the water was to prove useful when, at 18, he was nearby when the English poet Algernon Swinburne got into difficulties and would have drowned but for the young Maupassant.

Having attended a seminary in Rouen from the age of 13, he seemed destined for a similar institution, but by the age of 18 he was weary of religion and was already interested in the hectic social life and womanising that would destroy him. Much to his delight he was expelled.

He was to mature early and at 20 saw service in the Franco-Prussian war, a conflict which would feature in many of his stories, such as La Mère Sauvage and Boule de Suif. By 21, and a war veteran, he set off for Paris and spent 10 years in the civil service, working in the department of the navy. He had already become friendly with Flaubert and through him would meet Emile Zola and also Ivan Turgenev.

Boule de Suif – which is to Maupassant what Guests of the Nation (1931) is to Frank O’Connor – takes place during the Franco-Prussian war and centres on the hypocritical treatment inflicted on a young prostitute who is fleeing the Prussians along with some of the more socially prominent citizens of Rouen. No one travelling in the coach is prepared to acknowledge her presence until it is discovered that she alone of the passengers has brought food with her.

One by one, they weaken and eat her food, only to again turn away from her. Even more disturbing is the eagerness with which they pressurise her into agreeing to the demands of a Prussian officer intent on sleeping with her – and thereby securing permission to continue the group’s flight. But before Maupassant applies his art to the betrayal of the young woman’s kindness, he offers a characteristically insightful comment that remains all too true of human nature everywhere. “But the wealthier a Norman businessman becomes, the more keenly he feels any sacrifice and the more he suffers at seeing any portion of his fortune pass into other hands.” Mon Dieu, he might as easily be referring to the greed of present-day bankers.