While my book is fiction, I spent over a year researching the Lydia/Branwell affair 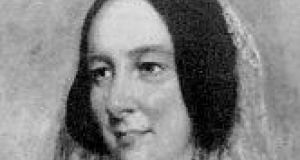 In my novel, Brontë’s Mistress, I give voice to Lydia Robinson for the first time, imagining what could have driven an established woman, without access to divorce or her own money, into a reckless affair with a younger and unstable man.

Nineteenth-century England. Five sisters and one brother are born in quick succession to an Irish father and a Cornish mother. But tragedy soon strikes – the deaths of the two oldest sisters follow shortly after the early loss of their mother. The quartet that remain are raised by their grieving father in a parsonage flanked by gravestones at the edge of the wild Yorkshire moors. The daughters will go on to become some of the most celebrated authors of their age; the son to die an alcoholic and an opium addict, having failed to achieve the greatness predicted of him.

This is the story of the Brontë family. It’s also the story behind the novels of Charlotte, Emily and Anne, including Charlotte’s Jane Eyre and Emily’s Wuthering Heights, which have delighted readers for nearly two centuries.

But there’s another chapter of this saga that’s much less well-known, although as scandalous and striking as the stories in the famous sisters’ novels – the history of Lydia Robinson, the older woman blamed for their brother Branwell’s early demise.

Elizabeth Gaskell wrote the first biography of her late friend and fellow novelist Charlotte Brontë in 1857. In her passages dealing with the fate of Branwell, she attributes his addictions and death to his employer’s wife, with whom he was rumoured to have had an affair. Lydia Robinson was described as a “wretched” and “profligate” woman, according to Mrs Gaskell. “In this case, the man became the victim,” she tells us, as she details how the married Lydia began an affair with a man 18 years her junior.

Lydia herself, who was still alive when the biography was published, was having none of it. While Gaskell’s book hadn’t named her, Lydia’s lawyers threatened the publisher with a libel lawsuit. But, although the allegations were withdrawn without the case coming to court, Mrs Robinson has been cast as the villainess of the Brontë myth by academics and biographers ever since. That is, until now.

In my novel, Brontë’s Mistress, I give voice to Lydia Robinson for the first time, imagining what could have driven an established woman, without access to divorce or her own money, into a reckless affair with a younger and unstable man. My Lydia is stuck in a loveless, and sexless, marriage with her husband Edmund. She’s reeling from the deaths of her mother and toddler daughter. Her surviving children are rebellious teenagers, and her mother-in-law is a force of nature, breathing down her neck. There’s no love lost between Lydia and Anne Brontë, her daughters’ governess. But when Anne’s brother Branwell takes up a position as her only son’s tutor, sparks fly. Branwell is passionate, imaginative, and searching for a great love to inspire his poetry. Lydia is desperate for affection and attention. It’s a dangerous match and the affair has consequences for them both.

While my book is fiction, I spent over a year researching Lydia Robinson and the Lydia/Branwell affair. It was important to me that everything that happens in the novel could have happened, and the book is in some way my response to the arguments that have raged between Brontë scholars and fans over the scandal. Every character who appears in the novel is real and I spent a lot of time trying to understand Lydia’s servants and neighbours, building up a picture of the world she lived in and the people who inhabited it.

My book is also in some ways a response to the Brontë sisters’ novels – especially those written by Charlotte. Charlotte had a penchant for heroines who were poor, plain, young and virginal. Lydia Robinson was rich, beautiful, in her forties, and a mother of five, yet didn’t she also suffer from living in a patriarchal society? Wasn’t her story worth telling?

In terms of the facts that are known about the affair, within just months of arriving at the Robinson household, Branwell wrote to a friend that his “mistress \[was] damnably too fond of [him].” A few months after that, he boasted about claiming a lock of Lydia’s hair. We also know that a little over two years after Branwell took up a position with the family, his sister Anne suddenly resigned from her role. And Branwell himself was dismissed by Edmund Robinson weeks later.

Some correspondence seems to have passed between Lydia and Branwell after this. There are rumours that she sent him money, via one Dr John Crosby (the local doctor and an important character in my novel). Lydia’s coachman brought news of her husband’s death to the Brontës’ hometown of Haworth. And Branwell’s poetry and sketches in this period paint a picture of a man who was very much heartsick, as he succumbed to the illnesses that would claim his life aged just 31.

Writing historical fiction can feel very much like detective work, and, given the Brontës’ unwavering popularity, I was surprised and delighted at the new details I was able to uncover while researching the book. Lydia Robinson is very much a woman of her time. We might not agree with all her choices, but I hope that, by the end of the novel readers can come to understand them. The Brontë sisters were immensely talented, and this wasn’t the only way in which they were exceptional. Most women were not educated and wouldn’t even have thought it possible that they might pursue their own artistic aspirations. I dedicated my book to “the women who didn’t write their novels” – that is, to the voices we haven’t heard from history; the women who’ve been forgotten, or, like Lydia, maligned and misjudged.
Finola Austin was born in England and grew up in Whitehead in Co Antrim. She is now based in Brooklyn, New York, where she pursues two careers, as a historical novelist and in digital advertising. BRONTË’S MISTRESS, her first novel, is published by Atria Books (Simon & Schuster) in Ireland and Britain.