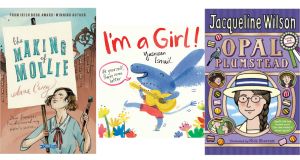 Happy International Women’s Day (and to answer your question about ‘well why don’t we have a . . .’, we do and International Men’s Day is November 19, save the date), falling six days after World Book Day and providing an annual opportunity for concerned parents to despair over the lack of female leads in children’s fiction.

It’s a familiar refrain, with teachers and booksellers often noting that while girls will read about male protagonists, the reverse is not true. The hero is the default; the heroine is niche. Anecdotal evidence suggests that today’s boys are less blinkered than we might imagine, but the ongoing fretting over boys ‘not reading enough’ still contributes to a sense that in order to appeal to as wide an audience as possible, the hero must be male.

The fact that this remains the case in a world where protagonists may be wizards, dragons, cats, dogs, badgers, dinosaurs, aliens or sentient toasters says much about our cultural obsession with traditional (not to mention binary) gender roles. Nevertheless, there are plenty of books out there which feature inspiring female leads and might even - gasp - be enjoyed by boys too!

For younger picture book readers, Yasmeen Ismail is a must-buy author. Her bright, bold illustrations and sense of fun and rebellion come through in all of her work. I’m A Girl (Bloomsbury, £6.99) is the most obvious title to suggest, but there’s something to love about each one of her books.

For slightly older picture book readers, Andrea Beaty and David Roberts’s Ada Twist, Scientist (Abrams, £10.99) recounts in verse a girl’s determination to ‘figure out’ the world through experiments, science and perseverance. Beaty and Roberts previously paired up on Rosie Revere, Engineer - you might notice a pattern emerging.

Girl detectives have been a staple of children’s fiction since Nancy Drew, but are faring particularly well at the moment with a number of ongoing historical series. Katherine Woodfine’s The Painted Dragon (Egmont, £6.99) is the third in her The Sinclair’s Mysteries, in which Sophie and Lil must team up once more to track down a missing painting. Robin Stevens’s Cream Buns and Crime (Puffin, £6.99) is a collection of short stories and other titbits from her Murder Most Unladylike series, in which amateur sleuths Daisy and Hazel so often find themselves near dead bodies.

Alternating between historical and modern settings, Jacqueline Wilson’s novels (published by Corgi) typically have a determined, resilient girl at their heart - try out any of the Tracy Beaker books; Katy, her retelling of What Katy Did; Opal Plumstead; the Hetty Feather series; The Suitcase Kid; The Lottie Project. Sally Nicholls is another empathetic and skilled author to watch out for in this age category, with her An Island Of Our Own (Scholastic, £6.99) updating the classic adventure story and featuring a resourceful heroine at its centre.

For anyone fascinated with spies, Ally Carter’s Gallagher Girls series (Orchard Books) takes place at a secret boarding school for spies-in-training and is suitable for young teens; her most recent novel, Take The Key And Lock Her Up (Orchard, £6.99) concludes a trilogy for slightly older readers featuring international intrigue and a mysterious scarred man who may or may not have something to do with the untimely death of the protagonist’s mother. At a recent event in Dublin, Eason’s children’s buyer David O’Callaghan described her heroines as ‘kick-ass’; it is an apt summary.

Teens young and old should read Anna Carey’s The Making of Mollie (O’Brien Press, €8.99), an accessible diary-style account of the suffragette movement in Dublin in 1912 with some remarkable contemporary parallels. A more modern take on linking the personal with the political propels Holly Bourne’s Spinster Club series (Usborne), in which the three protagonists, young women in their late teens, form their own feminist society and discuss both the abstract theory and practical realities of feminist thought.

Finally, Meg Cabot’s The Princess Diaries series has recently been reissued by Macmillan, in which humour and social satire play as much a part as romance. Mia, like many of Cabot’s heroines, is a realistic but smart girl (in implausible circumstances) who wants to change the world in some way and is determined to fight for what’s right. We can all learn a lot from this reluctant royal.
Claire Hennessy is a writer, editor, and creative writing facilitator