The language of June Caldwell's Room Little Darker is as lecherous as luxurious, and the subject matter intensely shocking. The elegant (if profane) prose incongruously illustrates disgusting scenarios 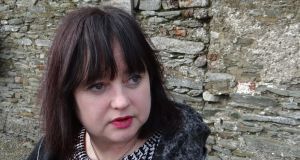 June Caldwell. There is an unmistakeable and inextinguishable flame of kindness throughout her new collection that recognises the shared humanity of even the most wretched.

Room Little Darker will excite S&M enthusiasts. Not only by virtue of the lewd and lascivious descriptions of their fetishes therein – but also because the experience of reading the book is like being trapped somewhere between pleasure and horror, all the while being relentlessly pummelled by a brutal master.

As an author, June Caldwell is a pitiless dom, sparing the reader no blushes while hammering home remorselessly all the natural and unnatural shocks that flesh is heir to. But it is no blunt paddle the author hits you with, it is instead a sharp crop – a precise silk switch fashioned of sleek similes, sophisticated metaphors, and sly metonymy.

The language is as lecherous as luxurious, and the subject matter intensely shocking. The elegant (if profane) prose incongruously illustrates disgusting scenarios. This creates a jarring disjunct, startling the reader on average not once per story, or even once per page, but in many passages once per sentence. No mean feat. A woman clumsily spreading her legs is “a faulty mussel shell”, a fella’s cock is functionally wanked off like “a boat part I’d no interest in but had to rough house to get on with the holiday”, and a woman’s perspective of fellatio during bondage – “ . . . having to chomp on it interminably until he shot a bad-diet load down my gullet” – subtly but inescapably calls to mind a trapped, force-fed foie gras goose.

Yet there are moments of startlingly unpretentious beauty here too, such as when snow turns streets “to collapsible soft meringue”. It is nonetheless an exhausting experience, precisely because of this linguistic lavishness. Caldwell is not a creature of habit when it comes to methodology, deftly employing a disparate variety of formulations to achieve her aims.

Joycean compound coinage when a woman looks “brothel-weary”, the compelling simile when an over-confident man talks too much on a car journey (“the lyricism of his voice swinging around his Adam’s apple like a Satanic hammock”), and refreshingly irreverent literary allusion as a busy idiot flies around “in a Dickensian mania – Mr Bumblefuck”.

It is perhaps such irreverence that makes this book so important. In this age of intense anxiety about the hordes of keyboard critics waiting to pounce on a hint of transgression, a new set of constantly evolving standards is being unilaterally installed. Despite the fact these rules are near-impossible to abide by (the call-out kings and queens are cannibalistic, turning on their own as often as anyone else), many fields of media have become trepidatious about transgression, afraid to fall foul of the mob.

Although the new puritans are ostensibly concerned with “equality”, in their vicious focus on superficial language policing they betray the traditional bourgeois concern with empty etiquette – style over substance (and indeed over sustenance). Caldwell’s complete lack of concern for such sensibilities makes for a truly refreshing aesthetic. With enthusiastic and gleeful abandon she smashes the stultifying atmosphere of false piety that has seen a new Legion of Mary try to replace the Catholic Church as Ireland’s self-appointed moral arbiters of culture.

Caldwell is certainly egalitarian in her task – nobody is spared her savage eye: men, women, the elderly, the stupid, the clever, the weak, the strong, the lumpen proles, the bourgeoisie, immigrants, racists – in short the variety of people who compose our society. What could be interpreted as misandry is counterposed by what would be almost certainly classed as misogyny if she were a male writer (her blunt Houllebecqian honesty about the female body, for example).

Yet there is an unmistakeable and inextinguishable flame of kindness throughout the collection that recognises the shared humanity of even the most wretched. It is from this the true horror of the book stems, as the misery and suffering people inflict on themselves and each other is all the more horrifying where their sentience and intelligence is so emphasised.

If Dubliners was a realist masterpiece, Room Little Darker is its hyper-realist counterpart, applying Joyce’s stated rubric of “scrupulous meanness” to the city’s contemporary inhabitants, and a future that’s approaching all too fast. As such, one story in particular could have provided an alternative title for the collection, the appropriately Joycean portmanteau of “Dubstopia”.