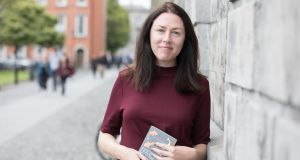 Trinity College is familiar territory for Caitriona Lally. She studied English there and today works in the college as a cleaner while she pursues her literary dreams and raises Alice, a 14-month-old baby girl.

Last night, however, she returned to the college in a different guise, where she was awarded the €10,000 Rooney Prize for Irish Literature 2018 for emerging Irish writers.

Her debut novel, “Eggshells”, was shortlisted for the Newcomer Award at the 2015 Irish Book Awards and the Kate O’Brien Award. In the United States, it has been published by Melville House.

“Eggshells” has now been reissued by Borough Press in Ireland and Britain, following her winning of the Rooney Prize, which is given to writers who show exceptional promise.

“It is a nice thing to win a prize for writers under 40, especially when you are 39 and three-quarters,” Lally said.

Fellow judge Dr Rosie Lavan said ‘Eggshells’ “reveals an artistic vision which is distinctive in contemporary Irish writing”, adding that the judges said it showed the promise of a fruitful literary career.

“Getting the phone call to say I’d won the Rooney Prize was just pure magic,” said Ms Lally, who is already working on a second novel, about a woman who goes to visit her brother in Germany.

“I’d been having a rough day – up early for my cleaning job, tearing home to mind the baby, baby wouldn’t nap and was making her feelings known,” she declared.

“So hearing Jonathan Williams say down the phone: ‘You’ve won the Rooney’; it was surreal. It felt completely at odds with the day I was having. I’d virtually given up on ever finishing my second novel, it all seemed so pointless.

“Finding out I’d won the prize gave me a confidence I’d lacked the past couple of years, and sent me back to the desk to really knuckle down and finish my second.”

The sense of acknowledgement was “unbeatable”, she said: “And the cash isn’t unwelcome either. It’s honestly like a lottery win, it’s that massive. It’ll be spent on creche fees and very mundane practical bills, nothing exciting I’m afraid.”

Frank McDonald: What’s not to like about Dublin’s new Kevin St development? Quite a lot
4