The morning after my birthday party, I woke to a recycling bin of empty prosecco bottles and a big pile of books 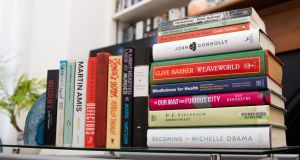 I had a big birthday last year. So, to allay the panic of friends invited to my party, and to stem the potential flood of scented candles and statement earrings, I told everyone what I wanted as a gift: a book. Not just any book. Their favourite book.

I have loved and hankered after books for as long as I can remember. Growing up, if I didn’t have a new book to read, I would just reread an old one. I can to this day quote vast tracts of the Famous Five, Little Women and a collection of Mills & Boon books somebody gave my mother (we didn’t have many books in the house, so I read absolutely everything that came my way).

I nearly fainted with excitement the first day I was taken to a library. And every year I pretended I was going to do a recitation at Scór na nÓg, just so I could borrow poetry books from the local teacher.

And so, the morning after my birthday party, I woke to a recycling bin of empty prosecco bottles and a big pile of books. Some were stiff hardbacks with ribbon markers, others slim, stylish paperbacks. I can safely say I would never, ever have bought the majority of them for myself. Several I would have run a mile from.

John Steinbeck? No way after how depressed I felt reading The Grapes of Wrath. Would I have sat down with a Martin Amis novel after the nightmare that was London Fields? Not without a gun to my head.

Others were fine. Michelle Obama’s autobiography would probably be interesting. And I love Colm Tóibín. I’d just never heard of his book, Mad, Bad, Dangerous to Know. But who was Guy Gunaratne? And Joseph Kanon? Or Anne Griffin?

Colm Tóibín could make his shopping list riveting reading, what a writer.

By now, I know the type of book I like to read and if a book doesn’t appeal in the first few pages, I’ll set it aside – it’s had its chance. I have my favourite authors and Martin Amis definitely isn’t one of them. But these were my birthday books and so I set about reading them with a purpose.

Becoming by Michelle Obama was great. From living in a tough neighbourhood as a child to behind the scenes at the White House, it was good to see she’s not above having a good whinge at times. Mad, Bad, Dangerous to Know turned out to be about the fathers of WB Yeats, James Joyce and Oscar Wilde, all eccentric characters – it’s a book of great stories. But Colm Tóibín could make his shopping list riveting reading, what a writer.

I discovered that Anne Griffin has written one of the best Irish debuts in recent years with When All Is Said. A few pages in I was trying to hold back the tears. Joseph Kanon’s Defectors was another great page turner, a spy thriller set in the cold war Soviet Union.

I was confused as I progressed through James Baldwin’s Another Country, somehow getting it mixed up with A Month in the Country, which is the story of a rural church restoration in 1920s Yorkshire. I couldn’t see where all the Harlem jazz clubs and drugged up parties fitted in, and kept waiting for Rufus, Vivaldo and the others to end up in the English countryside, but eventually became totally absorbed in this dark tale of tortured characters in 1950s New York.

Steinbeck’s Cannery Row, far from the soul-destroying misery of the Depression-era Grapes of Wrath, turned out to be a bit of a joy, still dealing with tough circumstances and hard times, but with gentleness and humour. Hawksmoor by Peter Ackroyd and the Malcolm X autobiography came on holidays with me, though I sometimes had to leave Malcolm aside, finding him too angry for blazing sunshine. But it’s a gripping story. And I was glad of the sunshine as I read Hawksmoor, exploring the dark stories behind the 18th century London churches designed by Nicholas Hawksmoor.

I thought I was going to have to give up on In Our Mad and Furious City by Guy Gunaratne, set in contemporary London – lots of “breddas” and “blood” and a lack of prepositions. Then something clicked and I couldn’t put it down, sitting up until 2am to finish it. The same thing happened with Martin Amis’s Money, huffing and puffing through the opening chapters before I suddenly got it – and realised it was a hilarious satire. Martin Amis? Love him. And so finally in my life I have learned the value of perseverance.

I’ve also learned that I do like science fiction, after reading Clive Barker’s Weaveworld. And I’ve realised I need to stop making snap judgments about things, deciding on scant evidence and far too quickly that “this is not for me”, dragging old prejudices into new situations.

In the days before my narrow waist and broad mind started changing places, I had one favourite book of all and last year I tracked it down again, buying it with birthday present money from my mother. I first read Amberwell over 40 years ago, the story of a family growing up in a beautiful country house. Back then I had decided that when I grew up my house would be called Amberwell or Amberley. And I felt sure, as an eight-year-old, that it, like the house in the book, would have three floors and a nursery wing, a garden terrace with a fountain, a bowling green and rose gardens, a lawn for afternoon tea and a forest leading down to the sea.

I’ve ended up in a two-bedroom converted flat in a terraced house in a cul-de-sac - but the street is called Amberley Grove. My life didn’t turn out at all as I imagined it – though in fairness the bowling green was always in some doubt. But I’m lucky to be surrounded by books and fantastic friends. And Amberwell was just as good as I remembered it.