A marriage, an affair, a miscarriage and an ex-wife’s alcoholism

Ariel Levy’s memoir is bald and bold in its honesty. She is a writer who pares things down until only simplicity and clarity remain 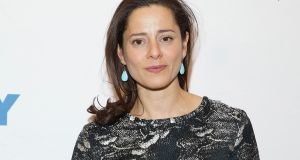 Ariel Levy: ‘When you lose your son, and your spouse, and your house, the house is not the most important.” Photograph: John Lamparski/WireImage

The writer Ariel Levy is on the phone in her house in Shelter Island. The seasons are changing and it’s time to get the garden ready. Shelter Island, at the east end of Long Island in New York, is north of East Hampton and west of Montauk, and a three-hour drive from the office of the magazine she works for, the New Yorker at 1, World Trade Centre.

When Levy sold her latest book, the memoir The Rules Do Not Apply, she bought the house back from her ex-wife, who had put it up for sale. “Obviously it’s the least important thing of the three. When you lose your son, and your spouse, and your house, the house is not the most important. But the house was the one I was able to get back.”

The Rules Do Not Apply, a memoir about marriage, an affair, a miscarriage, her ex-wife’s alcoholism, and their break-up, is Levy’s second book. Her first, Female Chauvinist Pigs: Women and the Rise of Raunch Culture, was published in 2005 when she was 30.

Taking aim at Playboy, Girls Gone Wild, and stripping as female empowerment, Female Chauvinist Pigs became a touchstone of third-wave feminism, a collection of essays that spoke to a generation of women who viewed pole-dancing fitness classes with suspicion and Playboy Bunny merchandise with derision.

Now, Levy has mixed feelings about that book, not for its content or points of view, which she still agrees with, but with its writing style.

“I sort of realised after I wrote the first book that I was not meant to write polemics. That’s not my natural mode as a writer. I don’t want to make arguments, I want to tell stories.”

At the time of its publication, Levy was a writer with New York Magazine. Following a piece she wrote about the writer George Trow, the New Yorker editor David Remnick effectively poached her, and in 2008 she became a staff writer at the magazine, a transition she told Cosmopolitan was “terrifying”.

“It’s fine that I figured that out,” she says about her realisation that she wasn’t a natural polemicist. “It doesn’t matter. It was a victimless crime.”

She profiles women who are “too much”, but also lives that reveal themselves within the twists they take.

“Anything where you’ve got a woman living a totally unpredictable, totally self-invented life, that always interests me,” Levy says. “But more generally – because I don’t only write about women like that, I write about men too – more generally what interests me, and I think I’m far from unique in this: I’m always looking for a story where there’s some element that’s counterintuitive.

“For example, when I first wrote about Edith Windsor, who was the plaintiff who brought down the defence of marriage act and essentially legalised same-sex marriage in the United States, my initial concern when I heard that story and was deciding whether to do it, was I was worried there wasn’t going to be anything counterintuitive. I thought, ‘if she’s just a noble old lady who has been fighting the good fight, there’s no surprises.’ And that’s not good. There has to be some surprises.”

“With her, the conflict would have been built in – she’s fighting the supreme court, she’s fighting injustice, so there’s the conflict. But I also wanted something unpredictable. Then, as it turned out, Edie is Edie so there’s plenty that’s unpredictable. But that was my concern. I’m always looking for there to be something that flips the switch.”

Levy has been described as a “journalist’s journalist”, but really, she’s a writer’s writer

Levy’s memoir is bald and bold in its honesty. She is a writer who pares things down on the page until only an enviable simplicity and clarity remains. A section about her ex-wife, whom she met during the blackout in New York, describes the almost juvenile early infatuation stages of love when one becomes impressed by someone’s seemingly pedestrian attributes: “Lucy told me about terracing the garden in one of the first emails she wrote to me, about how she’d studied the slope and carefully planned the drainage before she planted Meyer lemons and lavender. I was dazzled: Could there really be someone so wise as to understand drainage?” Levy has been described as a “journalist’s journalist”, but really, she’s a writer’s writer.

Many will be drawn to Levy’s memoir on the back of a 2013 essay she wrote for the New Yorker titled Thanksgiving In Mongolia, detailing a work trip she took while 19 weeks pregnant.

In her hotel bathroom, suffering from stomach pain, she squatted on the floor, “I felt an unholy storm move through my body, and after that there is a brief lapse in my recollection; either I blacked out from the pain or I have blotted out the memory. And then there was another person on the floor in front of me, moving his arms and legs, alive. I heard myself say out loud, ‘This can’t be good.’ But it looked good. My baby was as pretty as a seashell.”

The way Levy writes about this terrible, lonely loss of her baby son in Mongolia is remarkable in its plainness. Things are just described. It calls to mind Hersey or Orwell, a moment uninterrupted by anything other than its occurrence.

Considering she has spent so much time writing about other people, did she find herself stepping outside of herself and examining her own situation with those same critical faculties?

“Yes, absolutely, one hundred per cent. I think I was doing that as it was happening. Even in Mongolia. I’m not sure how much of that is being a writer and how much of that is about being in shock. I think it’s pretty common when you’re in the midst of a trauma to be in a state of shock and experience it as if you were looking down on it.

Did such an approach make it harder or easier to deal with? Again, Levy deals in facts, not hypotheses, “Who knows? I’ve nothing to compare it to. You’d have to experience it in a different way to answer that.”

The people she’s writing about in the memoir drop in and out of the narrative – Mike Huckabee, Caster Semenya to name a few.

“I’m not good with chronology. When I think back and someone says ‘what were you doing in 2010’, I can’t really do it that way. The way I remember time is based on what I was writing at any given time . . . I was trying to convey the experience of the way what you’re writing about sort of vibrates in your life.”

Levy writes around five articles a year for the New Yorker – “each piece takes two months and change”. The challenge is not time, but subject matter.

“The challenge is always finding a piece. That’s always the hardest part – what’s the next story. I don’t know about you, but often in between stories I think ‘oh my god, I’m not going to find another story, I’m never again going to find another story’, and then, you know, it’s always a huge relief to find one.” When she finds something that’s going to work as a story, she feels elated, she says.

“For 20 years all I’ve done with my time when I wasn’t socialising or exercising or gardening, is gather people’s stories and try to make decisions about which aspects of them should go on the page for the reader to get the maximum impact, the most true experience of the story.”

That method was used for her own story too. “I trusted myself to be able to do that. I’m not saying I’m so great or anything, I’m saying this is all I do. If there’s one thing I do it’s this: take a story and figure out which aspects of it are salient and which aspects should be put together in which order for the reader to have the experience you want the reader to have. That’s all I do, besides garden, eat, socialise, and potter around.”

The rest of the year will be made up by writing, and joining David Sedaris as the “opening act” on some of his book tour stops.

As for the rest of the day?

“I’m going to do yard work today. Everything is starting to unfurl in the garden so there’s a million things to do. A lot of trimming and clearing and that sort of thing that has to happen today, which is great. That’s my idea of a good time.”