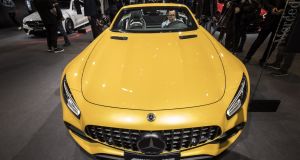 Volkswagen, Nissan, and Guangzhou Automobile Group are among the carmakers increasingly counting on Chinese government tax cuts to stimulate demand and help the world’s biggest auto market rebound from its worst slump in a generation.

The unanswered question is when that will happen.

Auto executives attending this year’s show in Shanghai gave a range of estimates from this month to the second half of this year. As a point of reference, the state-backed China Association of Automobile Manufacturers said last week that sales could rebound in July or August after the effects of government tax breaks trickle down to consumer spending – but overall growth would likely be flat this year.

The tax reductions could be big. China announced plans to cut a total of 2 trillion yuan (€264 billion) in duties and fees, including value-added taxes, this year to help bolster the world’s second-largest economy.

Still, not everyone is convinced that the stimulus will be enough to keep all carmakers competitive.

While automakers showed off some exciting new models at the Shanghai show, consumers likely will remain cautious until there is some resolution to the US-China trade negotiations and clarity on the direction of the overall economy, said Steve Man, a Hong Kong-based analyst with Bloomberg Intelligence.

Volkswagen sales chief Jürgen Stackmann said the carmaker saw demand in China pick up in April, though full-year sales may be little changed from 2018. It’s inevitable that China’s growth will moderate, but the company expects the market to continue growing in coming years, Stackmann said.

A day earlier, chief executive Herbert Diess said he was more optimistic about the second half of the year. The world’s biggest carmaker was “pleased” it boosted its share in China by about 1 per cent.

BMW chief financial officer Nicolas Peter forecast China sales to increase between 5 per cent and 10 per cent this year, but he said the overall auto market likely will be flat.

China’s overall car market continued to fall in the first quarter of 2019 but may recover in the second half with government help, said Makoto Uchida, president of Nissan’s Chinese joint venture.

Mercedes-Benz’s first-quarter China sales did quite well, said Hubertus Troska, head of parent Daimler’s China business. Troska also said more than 600 top-of-the-line, S-Class Maybachs were being sold a month, signalling that demand from the wealthy hasn’t been as affected by the overall industry downturn.

Bentley expects to see “good growth” in China this year because inventory levels are very low, and the brand has “a lot” of product launches coming up, chief executive Adrian Hallmark said.

Guangzhou Automobile president Xingya Feng said overall auto sales in China are expected to decline in the first half of this year, compared with the same period a year earlier. Sales should return to positive growth in the second half on the back of a recovering economy and policy support, he said.

Porsche chief executive Oliver Blume said China will remain an important market, and sales are bound to grow, but he stressed that the company wants to maintain regional balance to avoid becoming too dependent on one geographic area. – Bloomberg