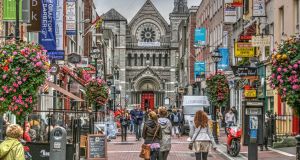 Trips to the State from Britain, one of the Republic’s biggest tourism markets, rebounded after falling during Brexit negotiations

The number of visitors to the Republic rose by 4.1 per cent last month despite the spread of Covid-19 to Europe.

New figures from the Central Statistics Office show that trips taken by Irish residents overseas also increased in February, rising 0.5 per cent to 559,000 compared to 556,300 for the same month a year earlier.

Trips to the State from Britain, one of the Republic’s biggest tourism markets, rebounded after falling during Brexit negotiations. Last month, the number of trips from Britain rose by 9.3 per cent to 282,100.

Visits from other European countries rose by 4.3 per cent to 217,800 although trips from North America fell by 6.3 per cent to 81,300 versus the same month last year.

In the two months to the end of February 2020, the total number of trips to the Republic increased by 2.2 per cent when compared with the same period in 2019. Irish residents’ trips overseas increased by 1.3 per cent over the period.

Figures for March are expected to show a huge decline in visitors to the State as the coronavirus crisis took hold earlier this month, leading to the cancellation of St Patrick’s Day parades and of many flights to and from the Republic.

Separate figures released this week show the rapid spread of coronavirus has prompted a switch from the Airbnb model of short-term rentals to longer term rental in key Dublin areas. The number of available one- and two-bed properties in Dublin 1, 2, 7 and 8 jumped to a five-year high, according to listings website Daft.ie