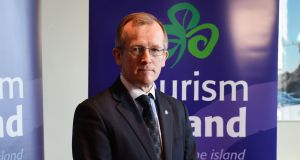 Tourism Ireland in the United States is aiming to increase revenue from North American visitors by 9 per cent this year.

The organisation, which announced its marketing plans for 2017 at an event in New York on Tuesday, said it would seek to surpass the record-breaking performance of 2016 by increasing visitor numbers by 6 per cent to 1.7 million.

It is hoped these visitors will generate €1.6 billion for the economy.

Separately, Fáilte Ireland announced plans to win €157 million in business tourism for the Republic in 2017.

Fáilte Ireland director of business development Paul Keeley said the events sector was a key component of the tourism body’s drive for visitors.

“The generation of leads with the potential to secure conference business that delivers a higher number of delegates per conference, and therefore greater economic value, is the central focus for our division this year,” he said.

Tourism Ireland meanwhile said it will prioritise North America as a market which offers a strong return on investment in terms of holiday visitors and expenditure.

“Our important ‘culturally curious’ and ‘social energiser’ audiences will be targeted with distinctive vacation experiences, events and special offers tailored to their interests,” said a spokesman.

“Tourism Ireland will create ‘stand out’ for the island of Ireland in the US, highlighting experiences like the Wild Atlantic Way, the Causeway Coastal Route, Ireland’s Ancient East, Belfast and Dublin.

“Screen tourism will also remain a priority, as the organisation continues to capitalise on our connections with Star Wars and Game of Thrones. Promotions will grow travel to the regions of Ireland, during the shoulder and off-peak seasons.”

The outlook for 2017 was said to be very positive due to a number of factors, including the availability of more airline seats than ever before between North America and Ireland.

There are currently 56,000 seats weekly from 18 gateways, while a number of new flights and expanded services are in the pipeline for this year.

“In 2016, we welcomed a record 1.6 million North American visitors to the island of Ireland,” he said.

“We are confident that our strategy – combined with more airline seats than ever before from the US, a strong dollar, as well as the strength and competitiveness of the vacation experience right around the island of Ireland – will deliver further growth.

“We look forward to welcoming more of our great friends from the United States this year and in the years to come.”

Alison Metcfalfe, Tourism Ireland’s head of North America, said the targets would be met through collaboration with partners.

“We will achieve this by working in close collaboration with our Irish and American tourism partners, rolling out an extensive programme of high impact campaigns and promotions which will target those consumers with greatest potential to travel to Ireland.”