Company tries to close gap in rosters that has caused cancellations for 400,000 travellers

Ryanair chief executive Michael O’Leary has apologised to more than 300,000 people who will be directly impacted by the airline’s rolling programme of flight cancellations. 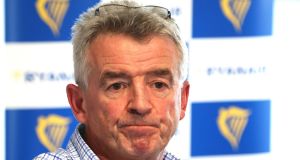 Ryanair CEO Michael O’Leary at a press conference at their HQ in Swords. Photograph: Collins Dublin.

Pilots at Ryanair are being offered up to €12,000 in bonuses to forgo annual leave in an attempt to close the gaps in work rosters that have caused flight cancellations affecting as many as 400,000 travellers.

The airline blamed its own “mess-up” in rostering that has led to pilots taking holiday leave in September and October and forced the cancellation of about 50 flights a day across Europe for the next six weeks.

To reduce further disruption to the airline’s flight schedule, the company’s chief operations officer Michael Hickey has, in a memo, offered to pay pilots bonuses to encourage them to give up annual leave.

The airline confirmed the contents of that memo are accurate but rejected recent reports that Ryanair pilots were planning strike action, saying “this is misinformation”.

According to the memo, captains will receive a once-off gross bonus of €12,000 and €6,000 for first officers if pilots who are due to take up to a month off agree to work one or two blocks of five days over the coming weeks.

The bonus payments are conditional on pilots completing more than 800 flight hours in the year to the end of October 2018 and and will not be paid until November 2018.

Pilots must also agree to work at least 10 days off between September 15th, 2017 and October 31st, 2018, including one block of five days during their month off.

More than 150 flights to and from Dublin airport have been affected by flight cancellations up to October 22nd, according to a list of cancelled flights published by the airline on Monday.

Ryanair chief executive has apologised to between 300,000 and 400,000 customers affected by the disruption that the airline has said is costing it about €25 million, including about €5 million in profits over the six weeks.

It expects to pay up to €20 million in compensation to affected travellers.

Mr O’Leary has conceded that the flight disruptions are “clearly a mess’” but said that in the context of an airline that operates 2,500 flights a day the cancellations were “reasonably small”.

Ryanair has denied that the loss of pilots to rivals, including the 140 pilots which Norwegian Air has said it has poached this year, has been a factor in the cancellations but blamed a mix-up in the allocation of annual leave to pilots.

Norwegian Air began offering cheap flights from Ireland to the US this summer.

Under EU rules, pilots can only fly 900 hours a year and 100 hours in any one month.

Ryanair said that it had to calculate pilots’ leave for a nine-month period from April 1st to December 31st this year, rather than from April 1st to March 31st as it had done previously, leaving pilots reaching their annual flight limits in September.

Mr O’Leary said during a press conference on Monday that the airline would be asking pilots to sell back some of their annual leave and may consider cancelling a portion of their time off, depending on their responses.

Ryanair has said that it will offer pilots with the rank of first officer a special €10,000 signing-up bonus for joining the airline between October 2017 and April 2018 if they have the objective of becoming a captain.