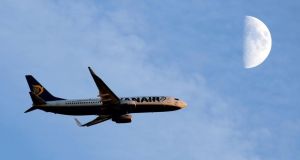 Just eight out of 554 pilots employed by Ryanair in the UK are women, according to new figures

Ryanair has said there is a 67 per cent pay gap between male and female employees at the airline.

The airline, along with other companies with more than 250 employees in the UK, is being forced to reveal gender pay gaps in its business. It also said that only eight out of 554 pilots it has in the UK are women – equivalent to just 1.4 per cent of all pilots.

“Like all airlines, our gender pay in the UK is materially affected by the relatively low numbers of female pilots in the aviation industry,” the airline said in a statement.

“In recent years, the number of female pilots applying to Ryanair has increased and we are committed to developing this welcome trend. It is a feature of the aviation industry that more males than females choose to enter the pilot profession,” it added.

Ryanair, which was one of the few Irish companies in the UK to proactively publish its gender pay gap conditions, said that 405 of its 586 UK cabin crew are women, equivalent to 69 per cent of all crew.

The new figures centre on pilots and cabin crew employed by Ryanair in the UK. They do not cover management and administration staff who are largely based in Ireland.

Ryanair and many other companies are being made to report on internal gender pays gaps by Wednesday under a deadline imposed as part of the UK’s Equality Act 2010 (Gender Pay Gap Information) Regulations 2017, which makes it mandatory for companies to report on pay conditions.

A gender pay gap at a company does not necessarily compare the wage of men and women doing exactly the same job, but possibly highlights discrimination.

The Ryanair figures show the median hourly pay rate equivalent for male employees is 71.8 per cent higher than that of female employees. In addition, there is a 3.4 per cent median bonus pay gap between men and women, which is predominantly due to most pilots being male.

Bank of Ireland, which has two units that employ more than 250 people in the UK, said the mean gender pay gap across the group as a whole stood at 35.7 per cent. This it said was primarily due to more women being in junior roles than men.

For Bank of Ireland UK plc, the mean gap was 24.6 per cent, while for the second unit, the Governor and company of the Bank of Ireland, the gap was 38 per cent.

Elsewhere, Paddy Power Betfair, which has two UK entities employing more than 250, issued gender pay gap figures in its annual report, which was published on Wednesday. It shows a 26.7 per cent gap for the group as a whole.

The company noted that 45 per cent of its employees at Power Leisure Bookmakers Ltd in the UK were female compared with 21 per cent of staff at Betfair Ltd, the latter of which deals primarily with developing and servicing the group’s online systems.

Greencore, with four entities in the UK, reported that at the end of 2017 female employees made up 40 per cent of its workforce there, and 45 per cent of its UK senior leadership team. The report showed the highest median ordinary pay gap for female staff stood at 12 per cent in The Sandwich Factory Holdings Ltd, while at Greencore Food to Go Ltd it was down to 2 per cent. However, when it came to bonuses, the median difference was up to 40 per cent at Greencore Grocery Ltd.

Most companies contacted by The Irish Times regarding publication of gender pay gap conditions did not respond to queries.

Hotels group Dalata, which is listed in both Dublin and London, said in its case no individual hotel under its control has more than 250 employees, meaning it did not have to publish the figures. However, the company said it is considering publishing such figures at some point.

Drinks group C&C said gender gap figures are included in those of its ultimate parent, Tennent’s, numbers. These show the mean gender pay gap at Tennent’s at 5.3 per cent compared with a UK average of 17.4 per cent.

Belfast-based IT company Kainos said it was not required to report figures as it is based in Ireland. However, a spokeswoman for the group said the company “strongly believes in the sentiment and focus behind the initiative and what it intends to achieve”. Given this, the company has published figures that show the mean pay gap at 20 per cent. Approximately 31 per cent of the firm’s staff are female.

First Derivatives, the other Northern company listed in London, published figures showing a mean gender pay gap of 23 per cent among its workforce, which comprises 30.2 per cent women.

Meanwhile Apple has become the latest big tech company to report its gender pay gap figures in the UK, a day before the deadline. Figures for Apple’s corporate entity, Apple UK, which accounts for the majority of management and technology jobs, showed men earned median salaries that were 24 per cent higher than female colleagues. Bonuses for men were 57 per cent higher at Apple UK, and 12 per cent higher including retail and sales staff.