Irish airline had been planning to fly from Britain, Sweden and Holland to Ukraine 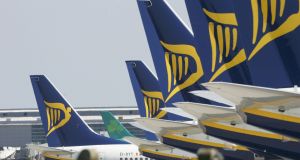 Airline Ryanair is cancelling plans to launch in Ukraine in a row over an agreement with Kiev’s Boryspil Airport.

The Irish airline had been planning to fly from Britain, the Netherlands and Sweden to Kiev and Lviv airports in October.

Ryanair said on Monday that it has cancelled those plans “following Kiev Airport’s failure to honour a growth agreement”, reached at the country’s ministry for infrastructure, with airport officials and chief executive Pavlo Riabikin.

The dispute has prompted the airline to drop four new proposed services to Kiev and seven to Lviv, which it said would have carried more than 500,000 passengers and created 400 jobs.

It was not possible to contact the airport’s spokesperson. Reports on Bloomberg indicated that Mr Riabikin had said in response that the airline’s offer was “not beneficial” to the airport.

Ryanair’s chief commercial officer David O’Brien said the airline would transfer the capacity to Germany, Israel and Poland instead.

10 US offers pathway to profit CRH paved in last recession