Move follows reductions in other services including Shannon-Manchester route 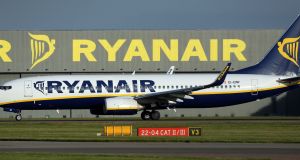 Ryanair plans to drop its Shannon-Paris Beauvais service next winter after cutting frequencies on other routes from the airport over the summer.

The airline operated a twice-weekly service between Shannon and Beauvais last winter but confirmed it did not intend to renew it this year.

Its move follows reductions in other services from there this summer. It cut flights on the Shannon-Manchester route to five a week this year from seven a week in 2016 and between the airport and Munich west in Germany to two from three a week.

“Due to aircraft capacity constraints, we will slightly reduce our Manchester and Memmingen frequencies from Shannon this summer, while our Paris Beauvais service will not operate this winter, as we continually review each of our 1,800 routes,” Ryanair said.

A number of months ago it emerged the airline did not intend renewing its services to Nice and Poitiers in France from Shannon this summer.

Ryanair stepped up its Shannon services considerably in April 2014 following the then government’s decision to axe the €3-a-head passenger tax.

In the first of a number of announcements following news that the State was cutting the charge to zero, Ryanair added eight services from Shannon that increased the number of passengers that it flew to and from there to 750,000 from 450,000.

Aer Lingus this year increased capacity on its Shannon-Heathrow service while US Delta carrier also began using a bigger craft on its flights between there and New York.

As a result capacity at the airport rose 3 per cent this summer and will increase by 5 per cent in the winter.