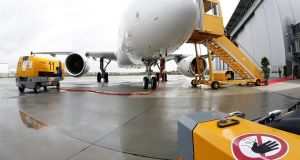 The growth drove revenues past the $1 billion mark for the first time in the company’s history.

SMBC leases aircraft to more than 100 airlines in 43 countries in Europe, Asia and the Americas.

Japanese companies SMFG and Sumitomo Corporation own the Irish group, which is headquartered in Dublin.

The group also confirmed on Wednesday that it closed the sale of a $500 million bond issued through a subsidiary, SMBC Aviation Capital Ltd DAC.

The bond has an interest rate of 2.65 per cent and is due for repayment in 2021. SMBC Aviation Capital has fully and unconditionally guaranteed it.

The company intends using the money raised for general purposes, including buying aircraft and paying off existing debt.

Its bond issue follows a $600 million facility agreed with a consortium of five major banks during 2015.

It delivered 57 craft to airline customers during the year, including its first Boeing Dreamliner.

Commenting on the results, chief executive Peter Barrett said that the success of its bond issue demonstrates the market’s confidence in SMBC’s growth plans.

“We have continued to expand our business across the world, particularly in Asia, which is a testament to both the strength of our strategy as well as our position as a global leader in this sector,” he said.