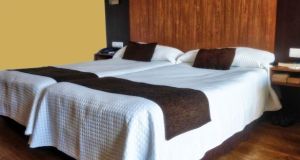 Occupancy rates at Irish hotels were down by over half in July despite a rise in the number of people taking holidays locally.

New figures published by the Irish Hotels Federation (IHF) shows average room occupancy nationally stood at 42 per cent for the month compared to over 90 per cent for July 2019 as bookings from overseas collapsed due to the coronavirus crisis.

This is the largest year-on-year decline ever recorded by the Irish hotels sector for the peak summer season and fears are that bookings for the rest of the year will also be considerably lower.

The federation said bookings for August are at levels broadly in line with this month, with occupancy levels at 24 per cent nationally for September.

The decline in occupancy levels comes as recent figures published by the Central Statistics Office show the number of overseas visitors fell by 97 per cent last month.

The survey results are based on the response from 305 hotels, which together have a combined stock of 29,500 rooms.

“Even in a best-case scenario we are effectively looking at occupancy levels of less than 30 per cent for the year as a whole. This is nothing short of disastrous for our sector with serious implications for the tourism industry and wider economy,” she said.

“Unfortunately the stimulus package recently announced by the Government just doesn’t go far enough given the scale of the crisis we are facing. The measures fail to deliver the required supports around competitiveness and liquidity, which is very disappointing and could have long-term consequences for tourism and the almost 270,000 livelihoods it supports,” Ms Fitzgerald Kane added.