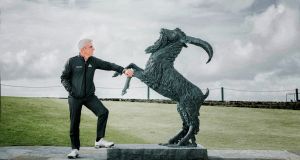 Soaring green fee income last year contributed to operating profits at one of the country’s best-known golf clubs, Lahinch, increasing by 65 per cent to €355,505.

According to the club’s 2018 annual report presented to members on Friday, the club achieved the increase in profit after green fee income increased by 15 per cent to €2.32 million last year.

At high season this year, it will cost €230 for non-members to play a round of golf at the links course which ranks in the world’s top 50 courses.

Staff at the club are busy preparing the golf club for staging the Dubai Duty Free Irish Open for the first time in the club’s 127-year history.

Lahinch club chairman Jim Nolan said on Friday that about 100,000 people will attend over the duration of the tournament in early July.

It will be the largest sporting event ever staged in Co Clare and Mr Nolan said, “The direct economic impact of the tournament is estimated at between €10 million and €15 million.”

He stated the long-term value to the club and region is inestimable and “the staging of the Dubai Duty Free Irish Open will secure the international reputation of Lahinch Golf Club and the surrounding regions for generations to come”.

Mr Nolan said that the international TV coverage of the event is estimated to have a commercial value of about €300 million.

However, the club itself is budgeting to record an operating loss this year of more than €260,000 as a result of the anticipated disruption from the event and more than doubling its spend in promotion/entertainment costs.

The club’s championship course is due to be shut for two weeks ahead of the event and closed for another week in September as the course hosts the Home Internationals.

The closures and increasing tee time intervals from 10 to 12 minutes are anticipated to reduce green fee income from €2.3 million to €2 million while the club is to increase its spend on advertising, promotion and entertainment from €139,555 to €304,000 this year.

The club counts former Irish rugby captain Paul O’Connell as a member and the buoyant year enjoyed by the club last year contributed to the club’s overall income increasing by 10 per cent to €3.83 million. Mr Nolan said that 2018 “has been another positive year on the financial front”.

The club’s total funds amounted to €9.1 million and included a €2 million “contingency fund”.