Airliner to provide first jets to country since pre-1979 revolution 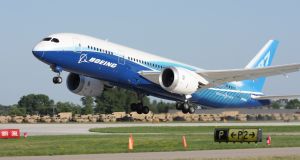 US Treasury Department has granted licenses to Boeing and Airbus to deal with Iran. Photograph: iStock

Boeing has won US approval to sell its first jetliners to Iran in almost 40 years, paving the way for the biggest business transaction between the two nations since the 1979 Islamic Revolution and hostage crisis.

The US Treasury Department granted licenses to Boeing and Airbus on Wednesday for the first of a flurry of aircraft orders that Iran is counting on to upgrade an aging fleet.

Airbus won approval to export the first 17 jets in a $27 billion(€24 billion) transaction announced in January as economic sanctions were eased. Boeing is still finalising terms to provide as many as 109 jets to Iran Air, the Chicago-based plane-maker said in a statement.

“It removes some uncertainty,” Howard Rubel, an analyst at Jefferies, said of Boeing’s license. “It says that commerce is important and commerce builds bridges. It is also a pathfinder for other people that may want to do business with Iran over time.”

Boeing’s last airplane deliveries to Iran consisted of 747 jumbos that arrived in 1977, two years before the revolution, according to the company’s website.

The Islamic Republic’s flag carrier would add more of the iconic, humpbacked 747s, as well as 777 and upgraded 777X wide-body jets under a $17.6 billion order for 80 Boeing aircraft.

The US manufacturer is also helping Iran Air line up another 29 planes from leasing companies.

7 The big problems ahead when Covid supports are wound down

8 Irish fintech Fineos on target to surpass €100m in revenues