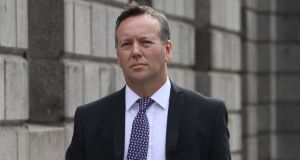 Peter Curran: as a result of a High Court application in May 2015, Eircom information connected emails to Mr Curran’s IP address and router at his Kerry home, the High Court was told.

A former catering manager at the K Club who alleges he was threatened at Punchestown Races has told the High Court he had nothing to do with five “forged emails” sent in the name of Dr Michael Smurfit.

The emails sent in April 2015 to K Club Resort superintendent Gerry Byrne purporting to be from Dr Smurfit referred to the alleged Punchestown incident and to Mr Byrne allegedly carrying out instructions of Dr Smurfit.

Peter Curran of Cahirciveen, Co Kerry, was in continuing cross-examination on Tuesday, the fourth day of his action against his former employer the K Club Ltd, Straffan, Co Kildare; Dr Smurfit and Mr Byrne.

In his action, Mr Curran has claimed his way was blocked in the toilets at Punchestown Races on May 7th, 2011, by Mr Byrne who allegedly said: “Dr Smurfit has not forgotten the statements about him and the call girls. Dr Smurfit knows where to find you and this is not over.”

He has claimed the alleged motive behind the alleged encounter was a reference to another case he had settled in 2008 relating to his K Club employment in which he had referred in a document to call girls being given free use of hotel facilities at the K Club.

The defendants have denied all claims.

On Tuesday, he was cross-examined by Dr Smurfit’s counsel, Shane Murphy SC, about emails sent to Mr Byrne between April 24th and 27th, 2015.

He said he had nothing to do with “this email saga” and “would never go down that road”. “I am here with clean hands. I did not send the emails.”

He was also examined about his claim his iPad went missing the weekend of April 24th but was later found on the rim of his car wheel outside his home two days later.

Mr Justice Anthony Barr was told, as a result of a High Court application in May 2015, Eircom provided the IP address from which the emails had been sent and the Eircom information connects the emails to Mr Curran’s IP address and router at his Kerry home.

When Mr Murphy put to Mr Curran the emails were sourced from his Kerry home, he replied: “That is incorrect.” He said it was a “sting operation” to undermine his legal team.

Counsel suggested the purpose of the emails was to try to make Mr Byrne make a false confession and the only beneficiary of the situation was Mr Curran himself “if this scam worked out”.

The court previously heard Mr Curran was catering manager at the K Club between September 1997 and October 1998 when he claims he was forced to leave and later brought an unfair dismissal case which was settled in March 1999.

Arising from that, he brought earlier High Court proceedings claiming alleged breach to his constitutional right to his good name and to earn a livelihood.Those proceedings were settled in 2008 and it is claimed it was an implied term of the agreement that Mr Curran would not be threatened, harassed or intimidated in any manner.