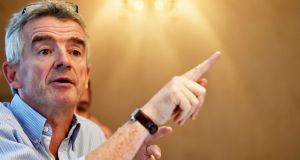 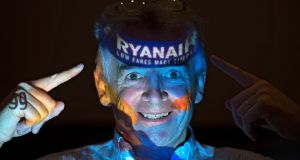 Ryanair’s Michael O’Leary believes there is no chance of the EU’s ruling being upheld by the courts. Photograph: Hannah McKay/EPA

Ryanair boss Michael O’Leary has weighed into the tax dispute between Apple and the European Union, saying the Government should write a letter to the EU telling them to “f**k off”.

Dubbing the EU’s ruling “bizarre”, the outspoken airline chief said: “One of the fundamental principles of the European Union is that each country has its autonomy to make its own tax decisions.

“Frankly the Irish Government should turn around – they shouldn’t even appeal the decision – they should just write a letter to Europe and tell them politely to f**k off.

“The idea that you have the state aid mob – who’ve had more court verdicts overturned than any other department in Europe in the last 20 years – come along 10 years after the fact and say, ‘no we didn’t like that, we think you should have done something else’, is frankly bizarre.”

On Tuesday, Europe’s antitrust commissioner Margrethe Vestager slapped the maker of iPads and iPhones with a €13 billion tax bill.

She claimed Apple paid just 1 per cent tax on its European profits in 2003 and 0.005 per cent in 2014, and said its arrangement with the Irish Government is illegal under state aid rules.

Apple is set to challenge the decision, and Mr O’ Leary added: “I think there’s no chance of this surviving a court ruling in Europe. There’s certain things that Europe has no competence in.”

Mr O’Leary went on to claim that Ryanair was “one of the most compliant taxpayers in Ireland”, having paid a tax rate of about 11.9 per cent on profits last year.

On Brexit, the chief executive, who backed the Remain campaign during the EU referendum, expects the United Kingdom to suffer “significant economic damage” as a result of its decision to quit the single bloc. However, he added that it is too soon to revise the company’s financial guidance.

In July Ryanair said it would “pivot” growth away from UK airports and instead focus on hubs in the EU following the Brexit referendum result. The firm said its growth rate in the UK is expected to slow from about 15 per cent to 6 per cent next year.

However, with long-term growth in mind, Mr O’Leary is now calling on the UK government to approve three new runways in a bid to end Britain’s airport capacity conundrum for “the next 50 years”.

He urged prime minister Theresa May’s government in Britain to be “radical in its decision making” and rubber-stamp new runways at Heathrow, Gatwick and Stansted airports. The proposal would mean ending the battle between Gatwick and Heathrow for a new runway.

“Ryanair calls on the new UK government to be radical in its decision making on new runways for London instead of picking just one [Heathrow or Gatwick] and calls on prime minister Theresa May to approve three new runways – one each at Heathrow, Gatwick and Stansted, which will finally resolve the runway capacity issue for the next 50 years, while ensuring competition between airports delivers efficient facilities and prevents airlines and passengers being ripped off by gold-plated monopoly runways,” he said.

A decision is now expected before the end of the year. Mr O’Leary said that expanding only one airport would allow airlines to justify raising prices for customers, who might subsequently help foot the bill.

But competition between three airports would be a boon for travellers and benefit Ryanair long term, he said. “We’ll have more capacity to grow, fares will fall and in a declining fare environment, we’ll win,” Mr O’Leary said.

Mr O’ Leary made the announcement as he trumpeted new routes to Strasbourg and Faro and more flights to Sofia and Nuremberg from Stansted, Gatwick and Luton airports.

He also warned Ryanair may reduce its full-year profit guidance if a drop in ticket prices accelerates. “We’re not yet revising the guidance,” he said to reporters on Wednesday in London.

“But we’re very cautious on the full-year guidance. If winter fares fall by more than 10 or 12 per cent, we will have to review.”

The carrier said last week it is seeing fares in its core summer period fall by 9 per cent, sharper than the 6 per cent to 8 per cent dip expected at the start of the budget airline’s fiscal year.

After the comments, Ryanair shares fell as much as 2.5 per cent and were down 1.6 per cent on Wednesday morning.

Coronavirus: how hard has Ireland’s economy been hit by pandemic? 11:42
EU court says short-term lets can be required to get official sanction in housing crisis 11:47
Start-up funding nosedives in Covid-19 crisis but fintechs to flourish 11:34
Record 330,000 jump in number of people claiming unemployment benefits 11:18
Ulster Bank outlook latest to be downgraded by Fitch 11:11