Pilita Clark: The average working week has lengthened since home became our office 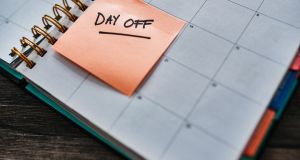 Some companies are rewarding employees for longer working days by giving them more time off. Photograph: iStock

On the first Monday of this month millions of people woke to a beeping alarm, rubbed their eyes and plodded off to get ready for another week of work.

At Unilever they stayed in bed. Or went to the beach, or binged on Netflix or did whatever else took their fancy because their company had told them to take the day off.

The household goods giant gave what it called a Global Day of Thanks to its workers for their months of pandemic-induced productivity.

Since large chunks of the group’s 155,000 staff started working from home this year the length of their average working week has risen by about 9 per cent.

Close to 90 per cent of employees who used to be in an office are working the same amount or more than they were before lockdowns began, the company told me last week.

Something similar may be happening at Google, which gave its staff a day off at the start of September.

Google’s move followed that of smaller US tech companies such as Chegg, an online learning outfit, that shut down for a day in April, a week in July and on Fridays over summer to give its 1,600 workers a break.

It acted after watching stressed staff struggle to be parents, teachers and fully-functioning employees as the pandemic took hold.

“We realised that we had a pretty big issue on our hands,” says Debra Thompson, Chegg’s chief people officer.

It is possible to feel sympathy for those workers while also acknowledging it could be worse: ask anyone who has just lost their job or is likely to very soon. It’s also possible to be sceptical, which I was when I first heard about Google’s efforts.

At the start of this year its parent, Alphabet, became the latest tech colossus to achieve the once unthinkable market value of $1 trillion. Giving a day off to its relatively small workforce (127,500 as of June) seems eminently do-able.

By itself, it is also questionable. One day of leave is cheering but if workloads stay the same and nothing else is done, it is hard to imagine that much changes.

Still, I give points to any company offering such breaks – especially in a useless vacation nation such as the US, practically the only advanced economy that does not guarantee workers a paid holiday.

For one thing a business-wide day off sends a signal that leaders understand the existence of burnout, a serious side effect of the pandemic no matter where people work.

Employees in a physical workplace are just as worried about fatigue and burnout as people working remotely, according to a survey of nearly 4,000 people in 11 countries released last month. In both cases, 43 per cent said they were concerned.

An executive who offers a day off also seems likely to be the type of leader willing to experiment with other admirable anti-burnout measures, such as meeting-free days or, better yet, meeting-free weeks.

That word “experiment” is critical. No one really knows precisely how to manage a workforce in a crisis of this scale. Some ideas are bound to fail. Some will need drastic refinement.

The main thing is to try, as the days-off pioneers are learning.

Some firms have found that if you give staff Friday off they will just spend all day Saturday catching up, so more has to be done to ease workloads.

Others think a day off works best when the entire business downs tools at once: it’s hard to tune out in New York if you keep getting work calls from London. Uniformity is not always possible.

Unilever tried to make sure everyone took the same day off on its Global Day of Thanks. But exceptions had to be made for the finance team, which was busy finishing the latest quarterly accounts. Local public holidays meant staff in some countries took a different day off to the rest of the business.

Other companies will find different problems. Some will test entirely different remedies. The main thing is to understand the nature of the problem and then have a go at fixing it.

1 Basic income for all: Has the Covid crisis given us a new economic model?
2 Promontoria barred from pursuing doctor over Ulster Bank loan
3 How long can Government afford to keep State pension age at 66?
4 Online shoppers face unwelcome tax surprise
5 ‘I don’t need to do any of this. . .I don’t actually need to work.’
Real news has value SUBSCRIBE