Facebook’s new emojis are all about sociology (and hearts) 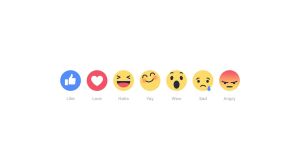 Adam Mosseri has a very important job. As the head of Facebook’s news feed, Mosseri and his team were tasked with determining which six cartoon images would accompany the social network’s ubiquitous thumbs-up button. They did not take the task lightly.

To help choose the right emoji to join “Like,” Mr Mosseri says Facebook consulted with several academic sociologists “about the range of human emotion.” These were the results, which began rolling out to Irish and Spanish users on Thursday, and may eventually reach all 1.49 billion users: The decision was reached after much deliberation.

To arrive at the best of those trivial and common picture-faces, there was a lot of data crunching and outside help. Mr Mosseri combined the sociologists’ feedback with data showing what people do on Facebook, he says. The goal was to reduce the need for people to post a comment to express themselves.

“We wanted to make it easier,” he said. “When things are easier to do, they reach more people, and more people engage with them.”

This may sound like a lot of effort for a mission other companies conquered years ago. The set of emoji Facebook settled on is similar to the reaction buttons the social network Path has offered since 2012. Apple software has hundreds of emoji. And Facebook already allows every user to comment with any emoji, digital sticker, or animated Gif they want to, with almost unlimited variety.

For this project, Mr Mosseri’s team categorised all those emoji, stickers, and keywords people use in their daily comments, posts, and mood updates. They then analysed the data, effectively tallying up the results to figure out which ones were the most popular.

There was also a lot of laughter, a category that included laughing emoji, “haha,” and ”LOL.” In order for something to qualify for the final list, it had to work globally so that users communicating between countries would have the same options, Mr Mosseri says.

One plea from millions of Facebook users that the company ultimately ignored was the request for a ”dislike” button. Mr Mosseri wanted to avoid adding a feature that injected negativity into a social network fuelled by baby photos and videos of corgis waddling around the beach.

A ”dislike” option, he says, wouldn’t be “in the spirit of the product we’re trying to build.”

Operation emoji continues at Facebook while the company monitors how we take to the new feature. The list isn’t final, Mosseri notes. The first phase in two European countries is “just a first in a round of tests,” he says.

“We really have learned over the years that you don’t know what’s going to work until it’s out there, until people are using it.”