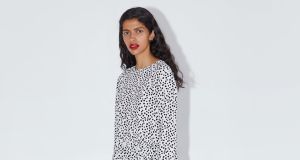 The Spanish group generated €12.8 billion in sales in the first half as like-for-like sales rose 5 per cent and gross profit rose 7 per cent to €7.3 billion. Earnings before interest, tax, depreciation and amortisation (ebitda), rose 8 per cent to €3.4 billion.

“Expectations have been high,” the group said in a statement on Wednesday. “The 8 per cent gain in Inditex shares over the past month has heaped pressure on the retailer to outperform rivals. European apparel retail has been a tough market lately, with Primark announcing a drop in like-for-like sales earlier this week.”

The La Coruña-based group’s shares were down about 3 per cent in early Madrid trading on Wednesday.

Inditex has pushed into a number of other markets, opening zara.com in Brazil in March. Two months later it launched online sales in countries such as Saudi Arabia, United Arab Emirates and Morocco.

The £39.99 polka-dot dress (€49.95 in Ireland) was so popular this summer that it opened its own Instagram account. Wearers say it is comfortable and easy to wear whether you are tall, short, slim or otherwise and can be worn to the beach, weddings or work. It became such a must-have, almost receiving cult status, that it often sold out and many stopped minding being seen in the same dress, considering instead that they were part of a club.

“We continue to favour Inditex for its strong business model, which is relatively integrated and flexible,” said Richard Chamberlain at RBC Europe. “It looks attractively valued compared to a group of global consumer peers.”

He added: “We expect underlying operating leverage to return in FY20 and free cash flow should improve as opex and capital intensity reduce, which is enabling Inditex to deliver ongoing above-average cash returns.”

Inditex’s push to open physical stores in so many new markets seems to go against the grain in the industry since rising business rates and wages have added pressure to many retailers. Adding to those difficulties, consumer confidence has weakened and customers have turned to online shopping.

Citi analysts Adam Cochrane and Matthew Garland said: “The main issue will be the focus on why gross margin has been weaker with no large FX moves and a strong LFL and why there is not more leverage on a solid LFL performance. This may again bring into question whether Inditex can grow both LFL and gross margin at the same time.” – Copyright The Financial Times Limited 2019