Our top 10 most read online business stories of 2017

Budget 2018; Chris Johns on Brexit; what you need to read before you die 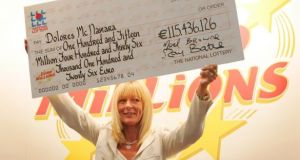 It’s that time of year where we round up the top 10 business stories online. And a bit like Manchester United, Budget 2018 was stuck in second place. It was the year that saw Dolores McNamara make the headlines; a period when Ryanair ran into trouble with its passengers and pilots, and – not surprisingly – Brexit.

1 At the top of the tree was a story from Mark Paul concerning Dolores McNamara who won €115 million in 2005 in the EuroMillions lottery. It told us how Ms McNamara, her family and the Eddie Hobbs-backed property fund Brendan Investments had until February 2nd, 2017 to reverse the planned forfeiture by local authorities in Detroit of scores of their houses in rundown parts of the city.

The authorities in the US city had sought the forfeitures over outstanding property tax bills. Before the houses were actually forfeited, the McNamara family paid the taxes due on their properties, reversing the process. The houses were then sold.

The McNamaras and Brendan Investments invested separately in the Detroit abandoned homes market between 2012 and 2014.

The family, who bought more than 100 units for $5 million, and the fund, which bought an estimated 500 units, have both lost heavily on their respective forays.

2 It comes around but once a year and leaks like a sieve but that doesn’t stop the annual budget mania. Budget 2018 was no exception as it comfortably occupies the second slot in our list. It was somewhat uninspiring with something for everyone in the audience, including a rise in pensions, a broadening of the tax bands, and cheaper prescriptions for those on medical cards.

3 Our third most-read story online concerns journalist Kevin Myers who found himself embroiled in controversy over a Sunday Times article by him on equal pay, which included offensive remarks about women and Jewish people.

Mr Myers wrote: “I note that two of the best-paid women presenters in the BBC – Claudia Winkleman and Vanessa Feltz, with whose, no doubt, sterling work I am tragically unacquainted – are Jewish. Good for them. Jews are not generally noted for their insistence on selling their talent for the lowest possible price, which is the most useful measure there is of inveterate, lost-with-all-hands stupidity. I wonder, who are their agents?”

The Sunday Times apologised for publishing the article and announced that Mr Myers would no longer write for the paper. The veteran journalist, who apologised for his remarks, subsequently took issue with his former employer and also with his treatment on social media.

4 It hasn’t been all plain flying for Ryanair this year but the company finished on a bit of high as it took the sting out of the threatened pilots strike by jettisoning one of its guiding principles and agreeing to talk to a trade union about recognition.

However, for our readers it was the issue of hand luggage that they were most interested in. The story said that Ryanair passengers would have to pay €5, or £5, for priority boarding if they wanted to bring a wheelie bag into the cabin from November 1st, as the airline was ditching its policy of allowing its customers to bring two bags aboard without charge.

The airline also reduced its checked-bag fees in a move that Ryanair said would cost it €50 million a year.

5 There is nothing like someone being less that impressed with our green and pleasant land to get our collective backs up and Prof Michael Hall’s comments on our tourism offering were no exception.

Under the headline, ‘‘Don’t come to Dublin. It’s a rip-off,” says tourism expert, Prof Hall went on to say “I would never, ever recommend anyone to come to Dublin for a short break because I think it is an absolute rip-off”. Rather presciently, he warned that the growing popularity of Airbnb would have massive implications for housing in Ireland and other countries.

He also said the housing crisis was an issue for the tourism sector because if local people could not get decent accommodation they would resent tourism, citing increased hostility recently in Barcelona towards foreign visitors.

6 In his weekly columns, Chris Johns pulled no punches over what he sees as the dunderheadedness of Brexit and this one, clocking in at number six, was no exception. Speaking of Britain’s attitude to Ireland, Johns said: “One of the many things I learned is that Irish interest in Britain is not reciprocated. I was ignorant before I came here and most of my countrymen remain so today.”

And he went on to say, after informing us that he was recently told to f**k off back to where he came from because of his British accent, that: “There is no other option open to Varadkar other than the line he is taking. Explain to Davis and May what happened after Collins signed up to a hard border. This isn’t going to end well.”

7 Chris Johns comes in at number seven with a trenchant look at what Trump’s trade stance and May’s Brexit strategy mean for Ireland. “Theresa May’s unedifying rush to embrace Donald Trump exposes several paradoxes about economic policy, the most prominent being their respective views on free trade: the British prime minister is in favour but the US president is implacably opposed. Just how this one plays out will be of critical strategic interest to Ireland, arguably one of the most globalised countries in the world.”

8 Fiona Reddan and Peter Hamilton gave us some dos and don’ts when buying a car through a personal contract plan (PCP). The duo advised that when it comes to car finance, it’s a case of caveat emptor – PCPs suit some buyers but not others. They advised prospective buyers to familiarise themselves with the small print.

9 Other people’s money is always interesting so it’s of little surprise that a piece on Ireland’s richest people comes in at number nine. Rachel Flaherty told us that the Weston family kept their title as the richest family in Ireland for another year, as a record number of Irish billionaires were noted.

Ryanair chief executive Michael O’Leary joined the billionaire club for the first time, with golfer Rory McIlroy topping the list as the wealthiest sportsman, and singer Niall Horan becoming the youngest on the list. Liam Neeson was named the richest Irish actor.

10 Fiona Reddan claims the last spot in our top 10 online business stories for 2017 with her story on what you need to do before you die. She asked, and comprehensively answered, such pertinent questions as what happens if you or a loved one dies unexpectedly? Does your family inherit your debts? Can they access your current account? Do you have to pay your mortgage if it’s in both spouses’ names? What about your mobile phone – do they have to continue the contract? And what about a car loan?

On that cheery note, we say farewell to the top stories of 2017 and ponder what stories might make the headlines next year.