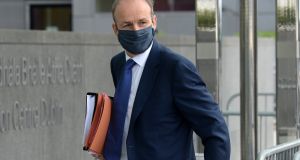 The Taoiseach Micheál Martin said it is important to examine how a sustainable, independent and objective media landscape can be funded into the future. File photograph: Dara Mac Donaill/The Irish Times

The media is critical to Ireland’s democracy, Taoiseach Micheál Martin has said after the inaugural meeting of a group which will advise the government on how news outlets can be saved from collapse over the coming decade.

The Future of Media Commission is due to report to the Taoiseach and Minister for Media Catherine Martin in nine months time about how strong, independent broadcast, print and digital journalism can be sustainably funded into the future.

It was set up in response to the growing existential threat to outlets and providers because of a shift in traditional funding and advertising revenue models.

Prof Brian MacCraith, a former president of Dublin City University, chairs the commission, which met on Wednesday after Cabinet approved the appointment of the latest new member to sit on the commission.

Siobhan Holliman, deputy editor of The Tuam Herald and a member of the Press Council of Ireland, is a journalist who has worked for more than 20 years in regional broadcasting and newspapers.

Other members include former editor-in-chief of the Guardian, Alan Rusbridger, as well as former broadcaster and Storyful founder Mark Little.

“A sustainable, independent, and objective media landscape plays a critical role in the functioning of democracy and it is important for us to examine how it can be funded into the future,” he said.

Ms Martin said the commission would examine how the media can survive “in a way that supports informed public discourse and provides platforms for our language, culture, creative arts and sport.”