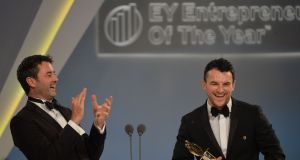 EY Emerging Entrepreneur Of The Year 2016 winners Paul Quigley and Andrew Mullaney of NewsWhip at the awards. Photograph: Alan Betson / The Irish Times

The founders of news monitoring company NewsWhip – Paul Quigley and Andrew Mullaney – have won top prize in the emerging category at the EY Entrepreneur of the Year Awards.

Founded in Dublin in 2011, NewsWhip tracks millions of news stories every day in more than 60 countries, and boasts over 320 clients globally. The service uses predictive data and analytics to identify breaking stories of most relevance to their clients, which include media companies, leading brands, government agencies and charities.

“It’s a great honour to have won the award. I think you win awards for hard work so this is the icing on the cake for all the work the team at NewsWhip has done over the last few years,” said Mr Mullaney, the company’s co-founder and chief technology officer.

“We’ve got to compete with the Google’s, the Facebook’s and so on for employees and winning this helps get across the message that there’s fantastic companies here in Ireland building great stuff,” added his colleague, Mr Quigley.

The company claims it can track and predict the virality of content in 40 languages based on how fast each story is getting traction.

NewsWhip, which started out as a consumer app for trending news before deciding to focus on the needs of business customers, employs 28 people in Dublin and 13 in New York.

The company successfully raised $1.1 million in a seed round in 2013 with supporters that included AIB and Enterprise Ireland. It followed this with a growth round of $1.3 million last year with backers that included Tribal VC, the Associated Press and the AIB Seed Capital Fund.

Exceptional speed “NewsWhip is a very deserving winner of the emerging category of the EY Entrepreneur of the Year 2016. As an Enterprise Ireland high-potential start-up since 2013, Paul Quigley and Andrew Mullaney have grown the company at an exceptional speed with over 300 paying customers in Ireland, the US and the UK,” said Orla Battersby, executive vice-president for North America at Enterprise Ireland and one of this year’s judges.

“NewsWhip is now trusted by journalists, editors, marketers and PRs including household names such as Associated Press, Mastercard, the Guardian, Reebok, the Washington Post, MTV and Walmart. This achievement, together with the founders’ singular focus on scaling their business to achieve their global ambitions, makes them a standout winner within the category this year, she added.

The other finalists in the emerging category this year were Stephen Smith of Kitman Labs; Mark McCloskey of Oneview Healthcare; Niall Stringer and Gillian Maxwell of Tiger Stores; Brian Lee of Chopped; Ciara Clancy of Beats Medical; Louise Grubb of Q1 Scientific; and Leona and Sean McAllister of PlotBox.