Tickets sales increase 17% to €7.6m while food and beverage income advances to €2.6m 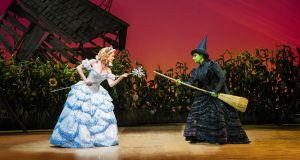 A scene from Wicked at the Bord Gáis theatre in Dublin. The production has been one of many popular performance in the venue.

The accounts also show that a repayment of €1.2 million was made to its parent entity, Crownway GC Limited, in respect of a €29.1 million non-interest bearing loan used to fund the acquisition of the theatre.

The average number of employees during the year rose by three to 40 while its total payroll costs increased by 7.5 per cent to €1.74 million. The company’s directors did not receive any remuneration during the year, with the exception of Trevor Bowen who was paid €50,000.

It is understood that the trading momentum from 2018 has carried into the current financial year with bookings for shows such as Mamma Mia, Warhorse and Phantom of the Opera performing well.

Crownway is a private family investment company owned by husband-and-wife team John and Bernie Gallagher, a daughter of the late hotelier PV Doyle. It acquired the theatre in 2014 for €29.1 million, and purchased the freehold on the property from Dublin City Council in 2017.

Entrepreneur Harry Crosbie opened the theatre in 2010 but lost control of the property after his loans were transferred to Nama.

Global music events and venue operator Live Nation operates the 2,111-seat venue and Bord Gáis Energy holds the naming rights until 2026. More than 500 productions have graced the stage, raising the curtain on an estimated 3,436 performances.

Swan Lake has returned to the theatre for a short run this week. Other productions lined up for later this year include We Will Rock You, 9 to 5 The Musical, The Snowman Christmas Special and Mama Mia, the hit show based on songs by Swedish group Abba.