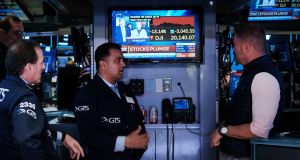 Dublin was one of the few places in which the stock market closed lower on Tuesday, as stimulus in Spain buoyed European markets and action by the Fed helped Wall Street edge higher.

Irish stocks clawed back gains late on Tuesday, although still closed 0.18 per cent lower on the day as volatility in equity markets persisted.

Housebuilders and property investment companies were among the biggest losers again on St Patrick’s Day.

But it was Dalata Hotel Group, the State’s largest hotel group, that took the greatest hit, falling 11.06 per cent to €2.05.

Meanwhile, Glenveagh Properties and Cairn Homes were down significantly, falling 8.47 per cent to €0.54 and 7.97 per cent to €0.69 respectively on economic concerns related to the considerable loss of jobs expected in the hospitality and tourism sectors.

Despite spending a significant part of the morning session in the red, London’s top flight jumped after the Federal Reserve said it would be launching a commercial paper funding facility.

Leisure companies dominated the bottom rungs of the FTSE after they were hammered by the UK government’s announcement to ask people to avoid pubs, restaurants and theatres in response to coronavirus.

Retailer Laura Ashley had its shares suspended after it announced it had filed for administration after the virus thwarted talks over a rescue package.

Fellow retail group Dixons Carphone saw its shares pick up after it announced plans to shut all 531 of its standalone Carphone Warehouse mobile phone stores in the UK. The group said the shops would shut on April 3rd as it plans to sell mobile phones solely in its 305 combined Currys PC World stores and online across the UK.

Elsewhere, British Gas owner Centrica slipped lower after two of the company’s bosses stepped down, leaving their successors to deal with the volatility caused by coronavirus.

The pan-European STOXX 600 index closed up 2.3 per cent after seesawing earlier in the day, following a dramatic sell-off on Monday.

Telecoms and utilities were the best performing European sub-sectors for the day, climbing more than 10 per cent and 5 per cent respectively as uncertainty over the pandemic kept defensive stocks in play.

Belgium’s Proximus topped the telecoms sector, rising about 21 per cent after it extended a cloud-storage partnership.

However, travel and leisure stocks, the worst affected by the outbreak, dropped about 5 per cent. The sector has declined for 18 of the 19 previous sessions, and is set to lose more than half of its value in the first quarter of 2020.

Airbus tumbled 8.6 per cent after saying it would stop production and assembly activities at its plants in France and Spain for the next four days in order to comply with government containment measures.

Frankfurt shares shrugged off a weaker-than-expected business sentiment reading, and closed about 2.3 per cent higher.

Wall Street rebounded on Tuesday following its steepest declines since the 1987 crash, with the benchmark S&P 500 up 5 per cent after the Federal Reserve relaunched a financial crisis-era purchase of short-term corporate debt.

Healthcare stocks were a bright spot as Pfizer gained 5.2 per cent after signing a deal with Germany’s BioNTech SE to co-develop a potential coronavirus vaccine.

Regeneron Pharmaceuticals jumped 12.3 per cent after the company said it had identified antibodies to potentially treat Covid-19.

Boeing’s shares tumbled as much as 22 per cent to a more-than-six-year low on Tuesday following a rating downgrade that reflected its worsening cash flow due to the extended grounding of its 737 Max jet and the blow from the coronavirus pandemic. – Additional reporting: Reuters