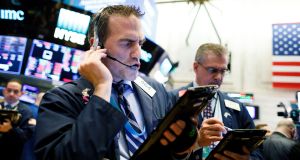 Traders work on the floor of the New York Stock Exchange as markets react to a trade dispute between China and the United States. Photograph: Justin Lane/EPA

European shares fell as China’s response to US tariffs fuelled fears of a trade war.

The Irish market reflected the rest of Europe. Cider maker C&C surged 8.75 per cent to close at €2.86 after announcing that it was buying UK drinks distributor Matthew Clark Bibendum. The Irish company will pay a nominal sum for the business but will provide it with working capital. Budweiser brewer AB InBev will provide additional cash to support the deal.

Traders said that the news sparked a strong revival in C&C’s shares, with five million of its stock changing hands in Dublin on Wednesday. “The announcement was very well received,” said one dealer.

Housebuilder Cairn Homes fell sharply towards the end of the day. The stock opened more than 3 per cent down but recovered some of that ground before tumbling 4.01 per cent to €1.77 ahead of the close.

Britain’s FTSE 100 managed a small gain on Wednesday despite global trade worries denting appetite for risky assets, as investors piled into defensive sectors which make up a large part of the UK index. The blue-chip FTSE 100 closed 0.1 per cent higher, while mid-caps fell 0.7 per cent.

Pharmaceutical stocks Shire and GlaxoSmithKline were among the biggest gainers, while precious metals miner Fresnillo was up 1.1 per cent, as gold is considered a safe-haven asset.

Cigarette firms British American Tobacco and Imperial Brands, and consumer goods giants Diageo and Unilever, also gained as investors rushed into high-dividend-paying stocks. Sectors which are more sensitive to the economic cycle, such as financials and materials, were the biggest weights.

Shares in WPP fell 2 per cent after the advertising group said it was investigating an allegation of personal misconduct against its CEO, Martin Sorrell, who denied wrongdoing.

The basic resources and tech sectors were worst performers, with falls of 2.4 per cent and 1.7 per cent respectively, while cyclical stocks such as financials and industrials also weighed heavily.

Even though trade war concerns dampened the broader sentiment, traders said some European companies such as Airbus or Adidas could get a competitive edge against US rivals in Chinese markets as a result of the tariffs.

Airbus shares fell 0.8 per cent, outperforming heavy losses in its US rival Boeing, while Adidas rose 1.3 per cent, broadly in line with gains in US peer Nike.

Swiss Re fell 3.9 per cent after the reinsurer said Japan’s SoftBank was in talks to buy a stake which is unlikely to exceed 10 per cent.

Bloomberg reported on March 29 that SoftBank was looking to buy a 25 per cent stake in Swiss Re, worth about $9.6 billion, as part of its drive to broaden its investments, which include its $93 billion Vision Fund for technology projects.

German IT leasing specialist Grenke rose 3.5 per cent after a positive trading update for the first quarter.

Boeing and Caterpillar led the slide as a raft of major US firms saw millions knocked off share values by the announcement of tariffs on $50 billion worth of the goods exchanged daily between the world’s two largest economies.

Shares of Boeing, the single largest US exporter to China, tumbled 3.8 per cent. Caterpillar fell 3 per cent. Ford, General Motors and Fiat Chrysler fell between 0.2 per cent and 0.8 per cent as investors weighed the competing impacts on their global operations and production.

Major tech names Apple and the FANG group – Facebook, Amazon, Alphabet, Netflix and Google – were down between 0.3 per cent and 2.9 per cent.