Investors in Sugru lose up to 90% of their money 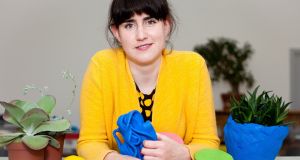 Sugru inventor Jane Ní Dhulchaointigh said the sale of the adhesive maker was not the financial outcome anyone had expected.

Sugru maker FormFormForm is being sold for about £7.6 million, in a deal that will see investors lose up to 90 per cent of their initial investment.

The London-based company, which was founded by Irish inventor Jane Ní Dhulchaointigh, James Carrigan and Roger Ashby in 2004, will be bought by adhesives specialist Tesa in a deal that will save the firm but values shares at 9 pence each. The German-based firm made a formal offer for FormFormForm in March. The offer has been accepted by 51 per cent of the company’s shareholders. The sale is set to complete next week, and Sugru staff, along with Ms Ní Dhulchaointigh, are expected to stay on with the company.

The move comes despite sales of Sugru recording double-digit growth in the past few years, with the company last December recording a sales increase of 20 per cent year on year.

The company said an expected second tranche of funding from a £4 million debt financing facility with Clydesdale and Yorkshire Bank (CYBG) was pulled back last November, causing financial difficulties for the company.

Sugru is a mouldable glue that works as a flexible, adhesive repair putty that turns into a durable silicone rubber. The glue was named as one of Time magazine’s top 50 inventions in 2010, and has built up a community of users online.

But although the company had some successful launches in bricks-and-mortar stores such as Target in the United States, it found driving awareness and reaching more customers through this channel more difficult than it expected.

“It’s been harder and taken longer than anyone imagined,” Ms Ní Dhulchaointigh said. “We came to a critical juncture at the end of last year. The bank pulled back from a £1.5 million debt financing. It left us very exposed.”

FormFormForm made the decision because it would need significantly more investment than anticipated to drive awareness of the product. Shareholders were informed of the decision on Thursday.

“While the targets in our second crowdfunding raise a little over a year ago, were significantly scaled back in line with slower performance than planned, it is now clear that the scale of the challenge was still not fully understood,” the company said in a note to shareholders.

Ms Ní Dhulchaointigh acknowledged it was very disappointing for investors, saying it was not the financial outcome that anyone had expected.

FormFormForm is backed by a mixture of traditional investors, bank debt and crowdfunding.

In May 2015 the company raised almost £3.4 million in a crowdfunding exercise through CrowdCube. It came back for a second round of funding in 2017 raising £1.6 million.

“We really saw crowdfunding as something that would be able to help us fund the business and also tackle the awareness challenge,” said Ms Ní Dhulchaointigh.

Other investors over the years have included Medra Capital, Antipodean Ventures, LocalGlobe and CYBG, through the debt financing.

The company took a number of steps to cut its costs, including two rounds of staff cuts in 2016 and moving assembly operations to Mexico to improve margins. Around the same time it launched with retailers in South Africa and France.

While those launches drove spikes in sales, maintaining the necessary levels of ongoing sales proved harder than expected. In the early months of 2018, several of the company’s largest shareholders provided support, along with the bank, to facilitate the sale and ensure the business’s survival.