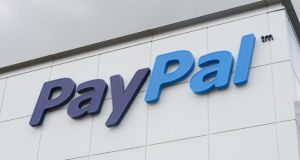 Companies with a tax rate of 12.5 per cent in their most recent financial year include Paypal. Photograph: Alan Betson

Ireland’s largest companies are paying a higher effective tax rate than the headline 12.5 per cent corporation tax rate, a new survey by The Irish Times shows.

In an analysis of the tax practices of Ireland’s largest companies, as determined by the Top 1,000 database, it was found that companies – both foreign and indigenous – are paying corporation tax on their profits at an average effective rate of 15.5 per cent.

Combined, Ireland’s Top 1,000 companies paid taxes of some € 2 billion in their most recent financial year, accounting for about 50 per cent of total corporation tax revenues in 2012.

The survey found that Dubai-headquartered international oil and gas exploration group Dragon Oil was the largest taxpayer in Ireland, with a tax contribution of €161 million in 2012, followed by US technology giant Microsoft (€132 million) and Ireland’s largest company, CRH (€120 million).

For various reasons, these companies also reported an effective tax rate of more than 12.5 per cent. Together, the top 10 taxpayers paid some €816 million in tax, accounting for almost a fifth of total corporation tax revenues in 2012.

With the domestic banks still mired in losses, the largest taxpayers in the financial services sector came from international players, with insurance group Chartis Excess paying taxes of some €19 million on profits of €64.2 million in the year to December 2011. Hewlett-Packard International Bank paid taxes of €14.5 million for an effective rate of 11.6 per cent.

Those with a rate of 12.5 per cent in their most recent financial year include Ryanair, Grafton Group and Paypal.

No tax on profits
The survey also identifies the companies that are not paying considerable sums of taxes.

Other companies, such as retailing group Harvey Norman, paid no tax on their profits because they carried forward losses from previous years.

The survey points to a distinction between Irish companies and their foreign counterparts. The top five taxpayers in the food and agribusiness sector are all Irish.

Combined, they paid tax at an average effective rate of 22.2 per cent in their most recent financial years.