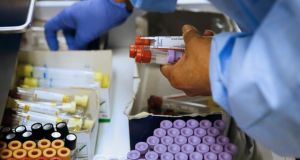 Medical diagnostics firm Randox Teoranta plans to create more than 470 new jobs over the next six years, as part of a €25 million expansion of its plant in Co Donegal.

The company currently employs 66 people in Dungloe, but hopes to increase its workforce to 540 by 2020.

Founded in 2008 with the support of Udaras na Gaeltachta, the company is part of the global diagnostics group Randox Laboratories, headquartered in Co Antrim.

In addition to engineering and manufacturing, Randox Teoranta conducts research into conditions impacting human health such as Alzheimer’s and diseases of the kidneys and liver.

Randox Laboratories founder and managing director Dr Peter FitzGerald said the company was planning to create cutting-edge scientific and engineering opportunities on a major scale, which would mean drawing talent from far and wide in order to drive innovation in human health.

“Our key message today is one of partnership, harnessing the power of the community and the diaspora is the key to help this company grow,” he added.

The company said it would be keen to engage locally and with key diaspora networks to access people who may have moved away for education or employment, as well as those with a broader connection to the region.

Minister of State for the Gaeltacht Joe McHugh said the investment by Randox will have benefits for the whole North West region.

“This commitment to the surrounding communities will act as a new roadmap, allowing us to position the region as a centre of excellence in the fields of engineering and life sciences”.

“The spectrum of highly-skilled job-types that this investment could create would provide significant opportunities to the Gaeltacht labour-force now and in the future,” she said.