Woman faces €40,000 bill for drug licensed in Ireland but not for her head and neck cancer 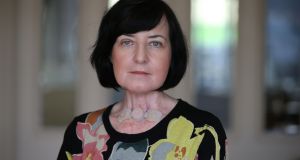 Cancer patient Maria Waters requires a drug that is not licensed in the State for the treatment of head and neck cancer. Photograph: Nick Bradshaw

The husband of a woman with stage four cancer has called on pharma company MSD to provide her with a €40,000 course of vital drugs on compassionate grounds.

Robert Waters, Maria’s husband asked MSD: “Why not give pembrolizumab (Keytruda) to Irish cancer patients like Maria Waters on compassionate grounds rather than wait 900 days for HSE approval.”

There was no formal response from the company, which has a significant presence in Ireland and is currently building a plant in Swords to manufacture the drug that Ms Waters needs.

However, the company is unlikely to be able to respond directly to the Waters family. Compassionate early access programmes are tightly regulated and any request for a special dispensation for access to an unapproved drug would invariably have to come first from medical consultants.

Ms Waters’ consultants have already written to her private health insurer, Irish Life Health asking it to consider paying for the drug. However, it has refused on the grounds that it is not licensed in Ireland.

As a result, the Waters family are having to find €40,000 for the course of four treatments.

The Waters case comes as a group campaigning for affordable access to drugs said that the price of new medicines was a concern for even the wealthiest of countries.

Although not speaking specifically in regard to the Waters case, or Pembro, Dr Kieran Harkin of lobby group Access to Medicines in a letter published in The Irish Times said that “patient advocates must go beyond simply urging governments to pay whatever price is demanded and also must seek to have such prices lowered”.

“We call upon the Government to become a leader in Europe to promote the systemic reforms that will end the access challenges impacting the care of our cancer (and other) patients who are being denied effective treatment because of exploitative monopoly pricing,” Dr Harkin wrote.