Emma Walmsley’s lack of experience cited as justification for salary 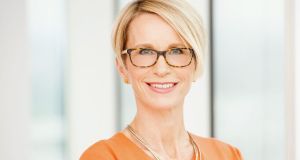 Emma Walmsley, poised to take over as the first female chief executive of GlaxoSmithKline, will earn about a quarter less than her predecessor Andrew Witty to reflect her lack of experience at the helm.

Ms Walmsley will be paid an annual base salary of about £1 million , the London-based drugmaker said in its annual report. That compares to Mr Witty’s pay of £1.15 million last year. Her targeted bonus doesn’t exceed her salary, whereas Witty was given the opportunity to collect 125 per cent of his pay through the bonus.

The lower compensation, for a woman who is breaking the gender barrier to become the first female to manage one of the world’s top 25 pharmaceutical companies, is likely to re-ignite a debate on the pay gap between the sexes. But it isn’t unusual that compensation levels change when a new chief executive takes office as boards seek to link pay packages to the person’s level of experience and tenure.

“This is the moment to reassess the executive pay structure,” said Stefan Stern, director of the High Pay Centre, a think tank .

“It’s good to focus on the contribution from the new person and it’s good to be tough and pay somebody less than their predecessor if their CV is at a different stage.”

Witty, who was also initially paid less than his predecessor, would have been CEO at Glaxo for almost a decade when he leaves at the end of the month.

Glaxo’s chairman Phil Hampton, who as director at Anglo American oversaw the capping of executives’ bonuses there, also heads a government-backed review on how to increase the number of female executives at the UK’s biggest 350 companies.

Pascal Soriot, who heads smaller drugmaker AstraZeneca, got a 2.5 per cent bump in his salary to £1.22 million for 2017, and can earn up to 180 per cent of his base pay as a bonus. He also gets long-term incentives that could be as much as 500 per cent of his salary, compared with 550 per cent for Ms Walmsley. Mr Soriot has been at the helm of the Cambridge, England-based company since 2012.

The compensation decision at Glaxo was part of a broader review of the drugmaker’s pay policy for top executives, which also resulted in demanding more share ownership and simplified the annual bonus system. The panel that sets pay was “particularly thoughtful about the quantum of the incentives” for the new chief executive, according to annual report.

“We have been in active consultations with shareholders on these matters and have been over several months,” a spokesman for Glaxo said. “Following feedback from shareholders, we have adjusted the remuneration policy.”

The decision at Glaxo comes amid increasing scrutiny of executives’ pay at UKcompanies following prime minister Theresa May’s campaign pledge to rein them in. Imperial Brands in January dropped plans to give chief executive Alison Cooper a raise of as much as £3 million.

Ms Walmsley’s task won’t be easy: the 47-year-old Oxford graduate inherits the challenge of piloting cutting-edge treatments for cancer and infectious diseases through clinical tests and onto pharmacy shelves to boost earnings and revive Glaxo’s shares.

Other recent appointees in the industry hadn’t led a company before, including Soriot, Novartis ’s Joe Jimenez -- who came from a consumer goods background, like Ms Walmsley --and Roche Holding ’s Severin Schwan.

Ms Walmsley, who takes over at the end of the month, comes from Glaxo’s consumer health business, known for brands such as Sensodyne, Panadol and Voltaren. She previously worked at cosmetics giant L’Oreal .

1 I want to change my will quickly in case I fall ill. Do I need a lawyer?
2 Lockdown exit: How can Irish economy reopen without big health risks?
3 Property market has not felt full impact of Covid-19, warns Sherry FitzGerald
4 Finance ministers gather as fears grow even the future of the euro zone is at risk
5 Coronavirus: The online scams, apps and trends you need to know about during the pandemic
6 Fitbit releases Charge 4 ahead of expected Google acquisition
7 Facing economic meltdown ... and nothing wrong with our economy
8 Tesco says coronavirus costs could reach €1bn
9 We cannot afford to neglect supply chains when supporting business
10 Five ways to create a culture of innovation in the workplace
Real news has value SUBSCRIBE