Smurfit Kappa was right to rebuff US suitor – Dermot Smurfit 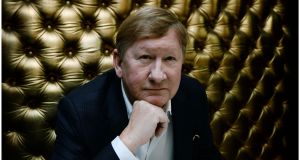 Dermot Smurfit: announced that he was stepping down from the board of Dublin-listed funds company ML Capital. Photograph: Brenda Fitzsimons/The Irish Times

Dermot Smurfit has said cardboard box-making giant Smurfit Kappa Group (SKG), founded by his father, was “absolutely right” to resist a takeover approach from US peer International Paper earlier this year, even though the stock has subsequently fallen by as much as 40 per cent.

The Memphis-based group’s indicative cash-and-stock bid, which was eventually pulled in June after SKG refused to engage with its unwanted suitor, was valued at as much as €9 billion at one stage.

Mr Smurfit (74), a former deputy chairman of SKG’s precursor Jefferson Smurfit Group, and who continues to own a “tiny” stake in the business, told The Irish Times that rebuffing Memphis-based IP’s advances was “absolutely the correct thing to do – they were low-balling them”.

He said that he expects the stock to rally again in time, having fallen in recent months. The sell-off has taken place against the backdrop of a slump in equities internationally and specific concerns about growing capacity in the cardboard industry, which may put pressure on pricing and profits. The censensus share price target among 12 analysts covering the stock is €35.49, pointing to more than 50 per cent upside from current levels.

Mr Smurfit made the comments in response to questions as he announced that he was stepping down from the board of Dublin-listed funds company ML Capital, which he has chaired for the past five years.

The assets under management at ML Capital, a fund-structuring and investment management firm specialising in European-regulated funds, rose from $1 billion to more than $7 billion during the period.

Mr Smurfit said he will remain a “significant” shareholder in the business, without giving further details, after he hands over the chairmanship at the end of December to Barry McGrath, who led Maples and Calder’s Dublin investment fund practice between 2008 and last year.

Mr Smurfit said that ML Capital, which now has about 60 funds attached to it and is led by chief executive Cyril Delamare, is “ready for its next growth phase”. He said that the Republic, domicile to €2.5 trillion of international fund assets, has a big opportunity in light of Brexit to grow this industry.

A further €2 trillion of fund assets are estimated to be under administration in Ireland. That total sector is estimated to employ about 16,000 people in the State, according to the Irish Funds Industry Association.

The latest set of ML Capital accounts filed with the Companies Registration Office shows that ML Capital recorded revenues of €4.38 million in 2017, up from €3.22 million a year earlier, while after-tax profit increased to €256,627 from €26,835.

1 Angela Merkel sweeps in to save the euro zone
2 Don’t expect a bonanza for Ireland from the EU’s €750bn recovery cash
3 In six months we will be in the grip of a 1980s-style recession
4 Perrigo tells court of ‘very high level of unfairness’ in €1.64bn Irish tax bill
5 What’s the real picture behind the May exchequer returns?
6 Here's the best free software to keep everybody occupied
7 Ryanair to process all Covid-19 refunds within 10 weeks, Michael O’Leary says
8 Fexco to cut 150 jobs as Covid-19 bites
9 What will it take to reopen the world to travel?
10 Irish company MyBio to sell 10-minute Covid-19 antibody test
Real news has value SUBSCRIBE