Barclays set to kick off hunt for next chief executive

Jes Staley expected to stand down by end of next year 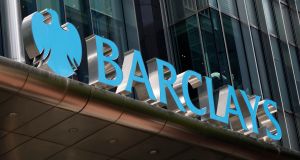 The Barclays search will focus on executives with experience of investment banking because the London-based lender derives roughly half its revenue from its corporate and investment bank. Photograph: EPA

Barclays is preparing to start the search for a new chief executive to replace Jes Staley, making it the latest European bank to look for new leadership at a time of upheaval in the industry’s top ranks.

Mr Staley (63), who has led the bank since December 2015, has told colleagues he expects to leave the group by the end of next year, according to two people briefed on the bank’s plans. He could stand down at the annual meeting in May 2021, they added.

A rough timetable for Mr Staley’s departure was in place before Britain’s top financial regulators recently launched an investigation into his ties to Jeffrey Epstein, the paedophile financier. But one of the people said the inquiry had “focused minds” on the bank’s board of directors and injected a sense of urgency into the process.

This month Barclays said Mr Staley was being investigated by the Financial Conduct Authority and the Bank of England’s Prudential Regulation Authority over the way he had characterised his relationship with Epstein, who committed suicide last year while awaiting trial on charges that he sex-trafficked underage girls.

Barclays’ board, led by chairman Nigel Higgins, is about to appoint an external headhunting firm – probably Spencer Stuart or Egon Zehnder – to identify potential external successors given the lack of internal candidates, the people said. The process could take up to a year – six months for the search and the same again to allow the candidate to fulfil any gardening leave requirements, they added.

The search comes amid a flurry of changes at the top of European banks, with UBS, Credit Suisse and Royal Bank of Scotland recently appointing new chief executives. HSBC is also searching for a new CEO, while ING plans to appoint a new leader by the autumn.

The Barclays search will focus on executives with experience of investment banking because the London-based lender derives roughly half its revenue from its corporate and investment bank, the people said.

However, one of the people warned that the bank could struggle to attract candidates from the US – which has the deepest pool of investment banking executives – because bankers there tend to be paid significantly more.