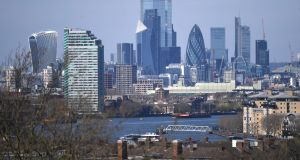 City of London. Last month HSBC said it was freezing external hiring other than for a small number of roles deemed critical or those who already had written offers.

A hiring freeze has settled over the City of London as companies put expansion plans on hold or scrap them altogether while the coronavirus outbreak continues, although searches for top executive roles continue.

“The number of businesses we’ve seen drop off in the last three to four weeks has just been astonishing,” said Philip Thompson, director of Thompson Taylor, which fills analyst- to director-level roles at banks, advisory firms and investment funds. “I expected it, but not necessarily so quickly.”

He added that the change was particularly noticeable in private equity given the downturn in dealmaking.

Hays, one of the biggest UK recruiters, warned last Thursday that the outbreak had caused “a very material deceleration” in its business, with operating profit for the year to June 2020 likely to be “materially below” analysts’ £190 million (€216 million)expectation.

Tiger Recruitment, which focuses on personal assistant and secretarial roles, said that demand for these positions had fallen sharply. Its revenue from temporary workers fell by 30 per cent in the last week of March compared with the first, while jobseeker registrations were down by nearly half and permanent hire inquiries from businesses dropped by 90 per cent in the same period. “Now that executives are no longer travelling, the requirements are far less,” said David Morel, chief executive.

Last month HSBC said it was freezing external hiring other than for a small number of roles deemed critical or those who already had written offers. The bank is also to delay many of the redundancies it announced recently as part of a restructuring programme.

The shift has left recruitment companies scrambling to adapt as business decreases. Hays has raised £200 million of equity to insulate its business against plummeting fees while rival recruiter Robert Walters has unveiled plans to cut costs and suspend its dividend.

Meanwhile Armstrong International, a headhunter for financial services, has made adjustments to it fee structure, with lower upfront costs to encourage business. Iona Prideaux, head of business development at Armstrong, said that said some searches had been put on hold, but not cancelled.

Unlike search firms, recruitment companies do not receive upfront costs, but get commission when successful placements start.

This made them particularly vulnerable as they faced losing future work as well as revenue from job offers made months ago, said Heather McGregor, executive dean of Edinburgh Business School and non-executive chairman at search firm Taylor Bennett.

Mr Thompson said he was worried about the prospect. “We have candidates who have accepted offers, with start dates booked in April and May. Are they going to go ahead?”

However, headhunting activity focused on the most senior executive positions has not stalled to the same degree, according to those in the industry.

“[Wit] a very senior strategic hire, it’s not a short-term thing,” said Ms McGregor. “You might slow the search down, but the chances of you suddenly deciding on the back of two or three weeks of crisis to can the whole thing is pretty small.”

A prolonged lockdown on movement could change that. “If it lasts three months, it’s not going to have a massive impact,” said Rupert Mathieu, partner at executive search firm Sainty, Hird & Partners. “The only thing that will stop searches completely is if this goes on for nine months or a year - then we all have a bigger problem.”

Others warned that being unable to hold face-to-face meetings could take a toll. “In executive roles, they could never make a decision without meeting someone,” said Tanya Lutyens, founder of executive search firm Lutyens Advisory. – Copyright The Financial Times Limited 2020