Over 2,000 Irish investment funds being investigated 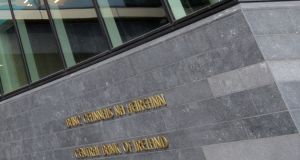 “We are keen to ensure investors are not misled or misinformed about their investments in Irish-domiciled funds,” says Derville Rowland, the Central Bank’s director general, financial conduct. Photograph: Alan Betson

Regulators are investigating more than 2,000 Irish investment funds to ensure they are not misleading customers about charges and other issues.

Large numbers of funds, called undertakings for collective investment in transferable securities (UCITS), where the money is invested in shares and which are are subject to EU rules, are based in the Republic.

Derville Rowland, the Central Bank’s director general, financial conduct, has confirmed it was investigating UCITS to ensure they were not misleading customers, who include private individuals and workers’ pension plans.

The bank is mainly concerned with “closet indexing”. This is where the fund managers falsely claim they invest the money actively to get better returns than those offered by stock exchanges, but actually take a more passive approach that results in returns matching those markets.

Actively managing funds requires those responsible for investing the money to trade the shares and other assets involved frequently to generate higher returns, which means they can charge higher fees.

Managing the investment simply to ensure they keep pace with stock market returns should require fewer trades, and so should charge less.

“We are keen to ensure investors are not misled or misinformed about their investments in Irish-domiciled funds,” Ms Rowland told a funds form organised by accountants EY.

“ That includes the issue of ‘closet indexing’. The Central Bank has begun analysis on 2,000-plus Irish domiciled UCITS funds that report to be actively managed.”

In 2016, the European body said that between 5 per cent and 15 per cent of UCITS could be “closet indexers”.

The markets authority warned that closed indexing harmed investors, as they did not get the service or risk/return approach they expected based on what the fund managers told them about their investment policy.

A Central Bank spokesman said its investigation was based on the the authority’s 2016 report and sought to ensure that customers were not misinformed about UCITS’ investment policies and charges.

The spokesman added that the probe would include a follow-up with any of the securities the Central Bank viewed as potential closet-indexing funds.

He warned that the regulator could use all its powers, which include sanctions such as fines, “depending on the nature of our findings”.