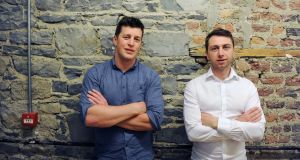 Barry O’Mahony and Tiernan Kennedy of Umba: the fintech start-up already has 170,000 customers in Africa, many of whom lack access to basic banking facilities, but can use Umba’s smartphone app. Photograph: Aidan Crawley/The Irish Times

Irish fintech start-up Umba, which facilitates micro-loans to emerging economies in Africa, has closed a funding round with two leading Irish venture capital firms that will pave the way for the company to lend up to €1 million a month.

The company, which was started by former Munster rugby professional Barry O’Mahony and co-founder Tiernan Kennedy, has secured a new equity investment from ACT Venture Capital and Frontline Ventures.

The company has also secured investment from Bloom Equity, a group of angel investors operating under the Halo business angel network umbrella group. The funding syndicate was led by Brian McDonald from Bay Advisory.

The firm was established to meet the needs of the rapidly-growing African mobile payments and debt market. It already has 170,000 customers in Africa, many of whom lack access to basic banking facilities, but can use Umba’s smartphone app as use of the devices grows across the continent.

“Traditional banking doesn’t work in developing markets for a number of reasons. In Kenya, poor transport options, low average incomes and no bank in close proximity are all contributory factors to less than 40 per cent of the population having bank accounts,” Mr Kennedy told The Irish Times.

“Unfortunately, no bank account and no banking relationship means no credit rating, which leaves people in a pretty poor position when it comes to leveraging credit options.”

Smartphone penetration in Africa and other emerging markets is being driven by tumbling retail costs, with new android units available for as little as €30, and deep discounts available for secondhand phones.

Using smartphones, mobile money accounts have grown significantly in markets such as Kenya, with funds equivalent to more than 40 per cent of the country’s GDP going through its mobile money system in the last year. The World Bank has estimated that there is still an unmet demand for lending of €19.3 billion per year in Kenya.

The company raises debt facilities to fund lending, with the latest equity raise earmarked for salaries and the costs of running the platform. The company uses artificial intelligence to constantly refine its lending algorithms. Umba plans to expand into new African markets later this year.

Mr O’Mahony played rugby professionally for four years with Munster before working with a mobile payments company that focuses on the African market. Mr Kennedy is a computer engineer who has worked with Canary, Saatchi & Saatchi, Novo Nordisk and others.

Conor Mills of Act Venture Capital said that “the opportunity and potential in these emerging markets is vast, and Umba has all the right ingredients in place to achieve great success”.

Finn Murphy, who works with Frontline Ventures, said that e-commerce in Africa “is one of the fastest growing market segments in the world”.

“Umba is one of those special companies where a great team identify an unaddressed need in a rapidly growing market segment,” he said.