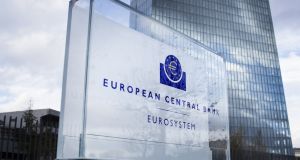 ECB policymakers suggest a combination of measures may be needed to prop up the euro zone economy as recent indicators paint an even bleaker picture of the outlook. Photograph: iStock

Banks in the euro zone will get more time to set aside cash to cover for loans that have gone or will go unpaid after the European Central Bank bowed to pressure from Brussels to ease its rules on the matter.

Banks will now have three years to set aside cash against a bad loan if it is unsecured, nine years if it is backed by real estate, and seven years for other types of collateral, the ECB said, in line with a timeframe set by regulation approved by the EU parliament in April.

Goodbody banking analyst Eamonn Hughes said the ECB ruling would have no immediate change from an Irish banking perspective. He noted that it explicitly sets out that rules for existing non-performing exposures remained unchanged.

However, he did say that the new rules would provide “a bit more breathing space in the next downturn”.

The move by the ECB’s new chief supervisor, Andrea Enria, ends a two-year dispute between Frankfurt and Brussels on an issue once worth a trillion euro in soured credit – for the most part a legacy of the last recession.

The ECB’s previous, more stringent, timeframe had led to an angry backlash from banks and lawmakers, particularly from Italy.

Euro zone banks have almost halved the pile of non-performing loans (NPLs) weighing on their balance sheets. These totalled €642.5 billion at the end of March, compared with over a trillion in 2015.

“Despite recent progress the ECB considers it of the utmost importance that the level of NPLs is further reduced, thereby resolving them in a swift manner while economic conditions are still favourable,” the ECB said.

Also on Thursday, the bank’s policymakers suggested that a combination of measures may be needed to prop up the euro zone economy, as recent indicators paint an even bleaker picture of the outlook.

With growth and inflation slowing for months, ECB president Mario Draghi has all but promised more stimulus as soon as September. A steady flow of dismal data has only reinforced the case for more support.

The accounts of a July 25th meeting showed more stimulus would include a combination of rate cuts, asset purchases, changes in guidance on interest rates and support for banks through partial relief from the ECB’s negative interest rate.

“The view was expressed that the various options should be seen as a package; ie, a combination of instruments with significant complementarities and synergies,” the ECB said.

A multi-tier deposit rate may be among the most controversial measures under consideration. The minutes indicated wide differences among policymakers; some warned about the unintended consequences of such a policy shift. – Reuters