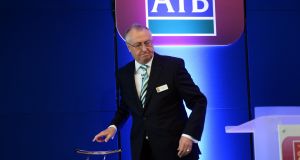 Richard Pym, AIB’s chairman, who is to step down next month

AIB is preparing to appoint former senior HSBC executive Brendan McDonagh as its next chairman, succeeding Richard Pym, who is set to step down next month.

The Dubliner, who joined the UK banking giant in 1979 and held various senior positions at the group across before retiring as chief executive of HSBC North America Holdings in 2010, joined AIB as a non-executive director in late 2016 and became its deputy chairman last November.

The 61-year-old also previously served as a director of the National Treasury Management Agency and as executive chairman of Bermuda-based Bank of NT Butterfield & Son.

“The selection process for the position of chair is at an advanced stage,” a spokesman for AIB said, declining to comment further.

An appointment is unlikely to be announced before AIB reports full-year figures on March 6th, when chief executive of 12 months Colin Hunt will also preside over the unveiling of his vision for the bank at an event for analysts and major investors in London.

The bank is expected to report that its pretax profit slumped to €438 million from €1.24 billion, according to Goodbody Stockbrokers analyst Eamonn Hughes, as the bank returns to setting aside small levels of provisions for bad loans, and as it sets aside additional money to cover compensation for the tracker-mortgage scandal.

Profits in recent years had been underpinned as the bank freed up hundreds of millions of euro of loan-loss provisions taking in the wake of the financial crash.

AIB warned earlier this month that it had taken an additional €300 million provision to deal with tracker-mortgage cases after the Financial Services and Pensions Ombudsman upheld a complaint by a customer that has a bearing on almost 6,000 customers who were denied a cheap mortgage linked to the European Central Bank’s main rate.

Analysts expect the profit drop will result in AIB’s dividend falling to 6 cent per share from 17 cent paid out on 2018 earnings.

Mr Hunt is expected to use his three-year strategy to outline details for cost savings, including job cuts, as banks grapple with an income squeeze from ultra-low interest rates, and set targets for a return of excess capital to shareholders, led by the State, which owns 71 per cent of the bank.

Mr Hughes expects the bank to increase its targeted minimum common equity Tier 1 capital ratio, a measure of a bank’s capital reserves to deal with a shock loss, to 14 per cent from 13 per cent to take into account rising regulatory demands.

“The market may sit tight for strategy and capital clarity and for the recent Irish political turmoil to settle,” Mr Hughes said in a note to clients this week, referring to the inconclusive general election result earlier this month.

Mr Pym’s five years as AIB chairman saw the bank return to paying dividends and the State selling an initial 29 per cent stake in the lender on the stock market. However, the chairman also clashed with the Government over pay restrictions across bailed-out banks, which, he said, was hampering domestic lenders’ ability to attract and retain key staff.