Eurostat revises its July estimate for consumer price growth to 1% 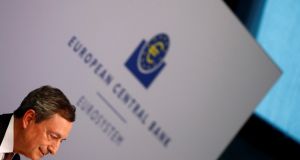 ECB president Mario Draghi: he has signalled that all options are on the table, including a potential restart of quantitative easing. Photograph: Reuters/Kai Pfaffenbach/File Photo

Eurostat revised its July estimate for consumer price growth to 1 per cent, down from a reading of 1.1 per cent reported on July 31st.

It is the second consecutive revision to inflation data. The report adds to negative data over the past weeks that may convince officials that bold steps are needed to revive momentum in the euro area.

Concerns about a global downturn are deepening as Germany’s economy shrank in the second quarter, while growth in the 19-nation currency came in at just 0.2 per cent. The ECB is already expected to announce fresh measures to jump-start the euro zone economy when policy-makers meet on September 12th, with most economists predicting at least a cut in the deposit rate from the current minus 0.4 per cent.

ECB president Mario Draghi signalled last month that all options are on the table, including a potential restart of quantitative easing.

Governing council member Olli Rehn said in an interview with the Wall Street Journal last week that the ECB should come up with an “impactful and significant” stimulus package at its next gathering. – Bloomberg

1 Life as a Facebook moderator: ‘People are awful. This is what my job has taught me’
2 Suspicions rife as key Brexit trade talks begin in Brussels
3 Corona beer firm reeling after 8% slide due to coronavirus
4 Flight attendant seeks High Court injunction against Aer Lingus
5 Irish companies restrict travel over coronavirus fears
6 How well paid do you think you are? Here’s how to work it out
7 Digicel plots network-sharing deal amid ‘tight’ cash levels
8 Coronavirus: Iseq down 11% in five days as global sell-off is worst week since 2008 crisis
9 Why Irish banks are now looking beyond vulture funds on problem loans
10 Coronavirus wipes €6.7bn off value of shares in Dublin
Real news has value SUBSCRIBE