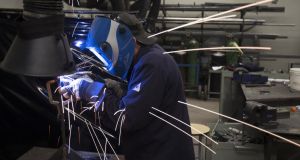 The latest register tallies with the current decline in headline unemployment, which fell to a nine-year low of 6 per cent on Tuesday. Photograph: Christinne Muschi/Bloomberg

The number of claimants on the Live Register continues to tumble in tandem with the pick-up in employment.

The latest monthly figures show the number of people signing on dropped by 2,400 (-1 per cent) in October, bringing the seasonally adjusted total to 246,900, its lowest level recorded since September 2008.

The latest register tallies with the current decline in headline unemployment, which fell to a nine-year low of 6 per cent on Tuesday.

On a seasonally adjusted basis, the register showed a monthly decrease of 1,400 males and 1,000 females in October. The number of long-term unemployed people on the Live Register at the end of October 2017 dropped to 101,590, a decrease of 3.6 per cent on the previous month, and an 18.6 per cent decrease on the same month last year.

“Today’s figures together with the unemployment rate of 6 per cent also published this week, reflect the continued improvement in the Irish economy which, in turn continues to give employment and creates jobs,” Minister for Employment Affairs Regina Doherty said.

“This Government will continue to focus on driving the economy and providing better opportunities for people while at the same time ensure that it helps those citizens who are most vulnerable,” she said.

The Minister also reminded jobseekers on the Live Register who may wish to take up seasonal work – for up to 12 weeks duration – between now and the Christmas /New Year period that their claim for Jobseeker’s Allowance or Benefit would resume immediately after their work finishes.