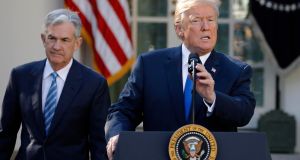 U.S. President Donald Trump announces Jerome Powell as his nominee to become chairman of the US Federal Reserve

Jay Powell was named by President Donald Trump as his nominee to serve as the next chair of the Federal Reserve, as he moved to make his mark on the world’s most powerful central bank.

The news ends months of speculation ahead of the end of Janet Yellen’s first term as chair in February. The post of Fed chair is subject to Senate confirmation.

The 64-year-old Mr Powell has been a serving Fed governor since 2012. A centrist on monetary policy, he is known as a pragmatic and down-to-earth official with private sector and government experience. A trained lawyer and former partner at private equity firm Carlyle, he also served in the Treasury under former president George H W Bush in the 1990s.

Ms Yellen issued a statement congratulating Mr Powell, noting his “seriousness of purpose”. “I am confident in his deep commitment to carrying out the vital public mission of the Federal Reserve. I am committed to working with him to ensure a smooth transition,” she said.

US financial markets remained unchanged on the news, after equity markets struggled for traction earlier in the day as investors parsed details of the sweeping tax reform bill. The dollar index, which measures the US currency against a basket of peers, was down 0.1 per cent at 94.7, having hit a five-session low at 94.41 earlier in the day. The yield on 10-year Treasuries was at 2.35 per cent, after moving slightly lower when the tax plan was unveiled, to sit just under the 2.4 per cent mark crossed last week when the more hawkish John Taylor, of Stanford University, was seen as a potential candidate.

In advance of the decision the US dollar was trading marginally lower on Thursday, amid a sense that Mr Powell is more dovish on monetary policy than some of the other candidates.

The president has the power to significantly reshape the Fed, with multiple seats on the powerful board of governors up for grabs. The early departure of Stanley Fischer as vice-chair last month opened up an additional vacancy, in addition to two other posts that are vacant.

Mr Trump made the first change in his tenure earlier this year when he named Randal Quarles to be the Fed’s first vice-chair for financial supervision, putting a voice for pared back Wall Street oversight in the Fed.

Some Republicans are hoping Mr Powell will also be more amenable to easing financial regulatory burdens than Ms Yellen, who was closely aligned with the more hardline approach taken by former governor Daniel Tarullo.

The deliberations over the role of the chair have been marked by intense speculation, stoked by people within Mr Trump’s orbit who have been pushing favoured candidates.

The president has appeared to relish the suspense, releasing an Instagram video at the end of last week declaring that the US public was anxiously awaiting his decision and that they would be impressed with his nominee. In a recent meeting with Republican senators, Mr Trump even took a straw poll of whom they would prefer as Fed chair.

In choosing Mr Powell, the president has spurned calls for disruptive change from some Republicans in favour of stability at the US central bank. The decision reflects an awareness at the White House of the sensitivity of all matters relating to the central bank, and comes as a marked contrast from Mr Trump’s attacks on the Fed during the 2016 presidential election campaign.

Under Mr Powell the gradualism pursued by Ms Yellen when it comes to rate rises is unlikely to change suddenly, and nor is the Fed’s policy of slowly but steadily reducing the size of its $4.5tn balance sheet. The central bank on Wednesday stayed on course towards a further interest rate rise in December, with further rises expected in the new year.

He has supported Ms Yellen’s arguments that the Fed is unlikely to be in a position to lift rates very far given slower potential growth and low inflation. One consequence is that the central bank is likely to have little rate-cutting firepower when the need to lower borrowing costs next arises.

Ms Yellen last month spelt out the implications of that view in a speech in which she argued for the Fed to be willing to fire off new rounds of quantitative easing, as well as steering the markets with forward guidance, if the US economy hits a new downturn.

The nomination will make the former lawyer the first Fed chair without an extensive background in economics since G William Miller in the late 1970s. Mr Powell, who regularly commutes to the Fed by bike, was born in the Washington DC area and earned a law degree at Georgetown University in the 1970s.

Married with three children, Mr Powell worked at the Treasury under Mr Bush before going to Carlyle. He joined the Fed’s board in 2012 after being nominated to the post by Barack Obama.

Among the other candidates whose fortunes waxed and waned in the race were two Stanford University academics: John Taylor and Kevin Warsh. Both have been critical of the Fed’s quantitative easing programme, which swelled its balance sheet to $4.5tn, and have been seen in markets as potentially more hawkish than Ms Yellen.

Gary Cohn, the National Economic Council director, enjoyed an early run at the job before falling from favour after criticising the president’s response to the Charlottesville protests.

Ms Yellen was also interviewed for the job. The decision not to give her a second term would mark a break from precedent by Mr Trump.