GDP grew at its fastest pace of the year, in the fourth quarter, rising by 0.5% 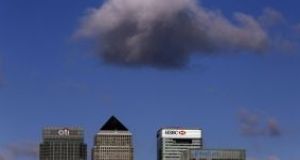 In 2017 as a whole, growth was 1.8 per cent compared with 1.9 per cent in 2016, better than many forecasters had predicted at the time of the Brexit referendum but the slowest since 2012

British economic growth unexpectedly picked up speed in the last three months of 2017, according to official data which showed the impact of Brexit still weighing on the economy but not as heavily as once feared by investors.

Gross domestic product grew at its fastest pace of the year, rising by 0.5 per cent from the previous three months.

That was faster than the median forecast for quarterly growth to remain at 0.4 per cent in a Reuters poll of economists. However, the Office for National Statistics said the big picture remained one of a slower and more uneven expansion in the world’s sixth-biggest economy.

In 2017 as a whole, growth was 1.8 per cent compared with 1.9 per cent in 2016, better than many forecasters had predicted at the time of the Brexit referendum but the slowest since 2012.

Sterling added to its recent strong rise against the US dollar and also climbed against the euro. British government bond prices briefly pared their gains.

“Today’s data is another positive surprise for the economy that puts pressure on the Bank of England to raise interest rates for a second time sooner rather than later,” Jasper Lawler, head of research at London Capital Group, said.

The BoE said last month it expected the economy might have slowed slightly in late 2017. Its interest rate-setters are due to announce their next decision on borrowing costs on February 8th.

They raised rates for the first time in more than a decade in November. Most economists have said they expect the next rate hike in late 2018 but some think it could come as soon as May.

Britain’s economy grew more weakly than other big rich nations for much of last year as the impact of the 2016 Brexit vote pushed up inflation and many businesses turned cautious ahead of the departure from the European Union in March 2019.

However, Britain has been helped by the recovery in the world economy last year which is expected to carry on in 2018. Bank of England governor Mark Carney said earlier on Friday Britain’s economy could start to grow more quickly later this year, if there is clarity about Britain’s future relationship with the EU.

“Despite a slight uptick in the latest quarter, the underlying picture is of slower and uneven growth across the economy,” ONS statistician Darren Morgan said. While recruitment agencies, letting agents and office management firms helped boost growth, companies which relied on spending by consumers had a much slower fourth quarter.

Manufacturers, who have ridden the wave of strong demand from the recovery in the global economy, also grew strongly.

“If the world economy is really picking up, the UK probably should be performing even stronger than it currently is, and highlights what the UK might lose out from in the event that it has to renegotiate all its trade deals once again,” Commerzbank economist Peter Dixon said.

Compared with the same period in 2016, growth between October and December slowed to 1.5 per cent, its weakest pace since the first quarter of 2013 and down from growth of 1.7 per cent in the third quarter.

In November alone, services output growth was the strongest since August 2016, jumping by 0.4 per cent from October.

The ONS said it was expecting no monthly growth in services in December given the scale of November’s increase.

Industrial output slowed to show growth of 0.6 per cent from 1.3 per cent in the third quarter after the Forties oil pipeline, Britain’s biggest, was closed for more than two weeks in December after the discovery of a crack.

Britain’s construction sector shrank by 1.0 per cent, its worst quarterly performance since the third quarter of 2012.

The preliminary estimates of GDP do not include a breakdown of spending, and are heavily based on estimated data.

1 Pilita Clark: When a rude boss keeps you waiting, why not walk out?
2 Comcast acquires Irish cloud-based telco Blueface
3 Five things to watch out for in Apple’s earnings
4 US threatens retaliation against EU over proposed carbon tax
5 Irish-founded ‘kid tech’ company SuperAwesome gets Microsoft backing
6 Henderson Park seek €400m+ for prime Dublin office blocks
7 Money matters: ‘My father embarrassed us with his haggling’
8 Opioid executive admits to ‘no morals’ ahead of prison term
9 Apple’s iPad turns 10 with hints of a resurgent future
10 Little strategic thinking in election manifestos of Fine Gael and Fianna Fáil
Real news has value SUBSCRIBE