Tax receipts fall behind target ahead of Budget 2019 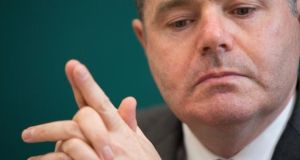 Tax receipts for the first eight months of the year have unexpectedly fallen behind target, suggesting Minister for Finance Paschal Donohoe will have little scope for surprise giveaways in next month’s budget.

The latest exchequer returns, published by the Department of Finance, show the Government collected €32.4 billion in tax so far this year.

While this was up 5 per cent on last year, it was €100 million below what the department had expected.

The figures were ahead of target in July but tax revenues in the month of August were €274 million below projections.

A spokesman said the shortfall was small in the context of overall revenue and spending and that the Government was still confident of hitting its end-of-year targets.

The main reason for the under-performance was excise duty, which was €250 million or 6.7 per cent below profile. The department said the frontloading of tobacco imports prior to introduction of plain packaging was still working its way through the system, making excise duty difficult to predict.

VAT, which reflects the strength of retail sales, also came in €81 million below target at just under €9.4 billion on account of larger-than-expected repayments to businesses.

Income tax, the Government’s largest tax stream, generated just over €13 billion, which was €835 million or 6.8 per cent up on last year, reflecting buoyant conditions in the labour market, but was still marginally below profile.

In keeping with previous months, corporation tax was the star performer, generating nearly €4.4 billion, which was €276 million or 6.8 per cent ahead of expectations.

About 40 per cent of the revenue generated from corporation tax here comes from a handful of firms, understood to include tech giants Apple, Microsoft, Dell, Google and Oracle. The Government has been warned repeatedly not to rely on current corporate tax growth to fund permanent spending measures given the increasingly uncertain outlook internationally.

Overall, the latest numbers pointed to an exchequer deficit of €1.8 billion for August, compared to a surplus of €1.8 billion at the same point last year. When adjusted for the impact of the AIB share sale in 2017, the exchequer balance shows an underlying annual decrease of €202 million, primarily as a result of increased expenditure.

Total gross voted expenditure for the period was just under €39.5 billion, which was was €152 million (0.4 per cent) below profile.

However, there is ongoing concern at escalating spending in the Department of Health. The latest figures put the overrun in health spending is at €307 million.

“Overall, the public finances are broadly in line with budget targets, but there will be precious little room for manoeuvre in October’s budget for 2019,” he added.

Peter Vale, tax partner with Grant Thornton Ireland, said: “Expect to see plenty of kite flying in coming weeks. However the main winners on budget day will reflect previous years, with low to middle income earners set to gain most.”