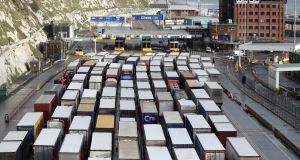 Trucks at Dover. The port – through which many Irish exporters and importers move goods – has said it is closed to trucking and passengers “until further notice”. Photograph: Gareth Fuller

Up to 250 Irish lorries stuck in England face returning home and dumping product after France banned road freight from Britain due to a new Covid-19 strain, a haulage industry group has said.

France suspended all air, rail, road and seat traffic from the UK on midnight on Sunday for at least 48 hours in an effort to stop a new strain of the coronavirus spreading from Britain.

Irish Road Haulage Association president Eugene Drennan said that turning around and returning home was the “worst scenario” facing Irish hauliers stranded in Britain as a result of the ban.

He estimated that between 200 and 250 drivers may not be able to continue on their journeys over the UK “landbridge” route to mainland Europe to deliver products, in some cases fresh food.

Mr Drennan said he spoke to Minister for Transport Eamon Ryan and his department’s officials and the French authorities on Sunday night about trying to permit Irish trucks travel on to France.

He has asked the French embassy about exempting lorries with Irish registration plates from the ban, pointing to how safely Irish drivers have been operating during the Covid-19 pandemic.

The Port of Dover in Kent closed to all accompanied traffic leaving the UK until further notice due to the border restrictions in France complicating the situation for Irish drivers stuck in Britain.

“If we have to turn trucks back on the road, it will result in a lot of product being dumped, a lot off missed deadlines and another dent in the reputation of Ireland, ” said Mr Drennan.

He said he hoped the Government would be able to help the stranded hauliers to be able to make a decision on whether they can either travel on to France or return to Ireland.

He said he had contacted DFDS, the operator of the new direct Rosslare-Dunkirk service that starts on January 2nd, to see if the shipping line could begin sailing earlier to help the situation.

“I am very concerned and annoyed. I have flagged this since June, that we do not have enough capacity on direct ferries to France. We are badly caught, by the whim of France,” he said.

The landbridge, traditionally the cheapest and fastest transit route for Irish hauliers to and from mainland Europe, has been delayed in recent weeks by heavy congestion from pre-Brexit stockpiling. The French travel ban has brought this route to a standstill with 10 days to Brexit.

Mr Drennan said that he called on Irish hauliers not to load any cargo for transport to mainland Europe through the UK landbridge until they have a booking on a direct ferry.

“We don’t have enough capacity tonight or tomorrow. We are really caught,” he said.

Aidan Flynn, general manager of the Freight Transport Association, an Irish group, said this was a “perfect storm” with Covid-19, pre-Brexit stockpiling and Christmas supplies falling at the same time.

Last night the port of Dover – through which many Irish exporters and importers move goods – announced that it was closed to trucking and passengers leaving the UK “until further notice”. Containers can continue to be sent unaccompanied.

The issue will be a major problem for Irish exporters and importers. While the Government has said that freight movements between Ireland and the UK will continue, the movement of goods through UK ports looks set to effectively stop. This will cause a particular headache for companies trading in time-sensitive food products. About 150,000 truck movements a year are recorded through the landbridge to and from Ireland.

A number of new direct routes from Irish to continental ports have been opened in recent months in advance of Brexit and some deliveries are likely to be redirected on to these services.

According to Mr Flynn, the latest developments would test whether there is enough direct capacity, as the Government has claimed. Direct routes typically take longer and thus cost more than normal use of the landbridge. Already there have been major delays through Kent on the way to Dover in recent days due to stockpiling ahead of the UK’s exit from the EU trading block at the end of the year.

The UK’s exit from the EU single market is expected to lead to delays in freight traffic due to new customs procedures – and if there is no trade deal, the delays could be worse.