State’s chief economist warns on public finances ahead of budget 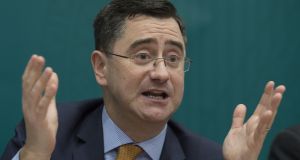 Chief economist at the Department of Finance John McCarthy said the economy is in a ‘finely balanced position’. Photograph: The Irish Times

The Government will be forced to walk a fine line in next month’s budget with debt levels spiralling and the prospect of a no-deal Brexit looming, the Department of Finance’s chief economist has warned.

In a presentation given to senior officials in recent days, John McCarthy said Ireland’s public debt was already “among the highest in the developed world” before the Covid-19 pandemic. And it is now set to rise again as the Government borrows to pay for wage supports and additional health spending.

This could mean the State’s gross debt rises to about €250 billion or 125 per cent of national income, he warned. That would equate to more than €45,000 for every man, woman and child in the State or €90,000 for every worker in the economy.

In his presentation, published alongside several papers from the Government’s Tax Strategy Group, Mr McCarthy said the economy is in a “finely balanced position” and that budgetary policy would have “to walk a fine line” between supporting the economy and ensuring fiscal sustainability.

The State’s national debt would have to be refinanced in the coming years potentially at higher borrowing rates, he said, while market sentiment towards Ireland, which remains positive, could change rapidly.

Mr McCarthy also warned that the possibility of a disorderly Brexit would impose additional economic and fiscal costs, as would any loss of corporation tax receipts.

The Government’s budget deficit – the difference between what it spends and what it takes in in taxes – is expected to swell to €30 billion this year from a surplus in 2019. Consequently, Minister for Finance Paschal Donohoe’s room for manoeuvre in next month’s budget is expected to be extremely limited.

In a paper on the economic outlook in the wake of the pandemic, the Government’s tax strategy group dismissed the prospect of a rapid V-shaped recovery, suggesting economic activity would remain below its pre-crisis peak “over the next few years”.

“With the reopening of the economy under way, the focus of budgetary and fiscal policy is shifting towards supporting economic recovery and will therefore pivot away from the damage limitation phase to an economic stimulus phase,” it said.

In a paper on income tax, the group suggested the Government consider extending the favourable tax treatment only available to married couples to co-habiting couples to reflect changing “ societal norms in Ireland”.

In a review of carbon tax, it criticises the way the Government has set a target of increasing the tax by a specific rate each year, saying this does not account for rising or falling oil prices.

Consideration should be given to possibly increasing stamp duty on residential property transactions above €1 million, which is only 2 per cent and low by international standards.